The whole point of an SUV crossover like the Vauxhall Crossland X is to offer affordable motoring with strong practicality and a good view out – and the car fulfils this brief well. While some of the engines are more efficient than others, as long as you avoid the gutless entry-level petrol there are no poor choices in the range.

It used to be true that the more power an engine had, the more fuel it would use. That’s largely still the case, but the recent glut of small, three-cylinder turbocharged petrol engines manufacturers are fitting to their cars has upended that trend, offering greater power and efficiency than the larger, less powerful engines that they either replace or offer an alternative to. 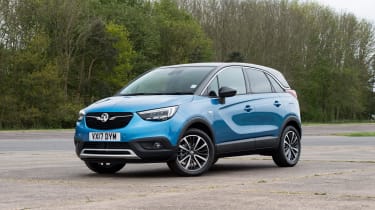 Take the basic 1.2-litre petrol engine, which marks the entry point to the Crossland X range. This produces 82bhp and has four cylinders but can only muster 44.8mpg.

Upgrade to the three-cylinder 1.2-litre turbocharged petrol and you’ll be getting a far more modern engine, which offers greater power and the same running costs. The 108bhp version is capable of up to 46.3mpg and CO2 emissions of 142g/km. Upgrade to the 128bhp engine and it’s slightly less efficient, producing 43.4mpg with emissions of up to 147g/km. If you’re in the market for a petrol Crossland X and can afford the upgrade, those figures mean the turbocharged petrol 1.2-litre is the one to go for.

Diesel is the answer if you cover long distances on a regular basis and the modern 1.5-litre engine comes into play here. This officially returns up to 58.8mpg when specified with 101bhp and 54.3mpg when ordered with 118bhp.

Company-car drivers should choose the less powerful of these engines, as in this form the Crossland X emits 125-128g/km of CO2 for an upper-tier Benefit-in-Kind (BiK) rating. The emissions of the turbocharged petrol 1.2-litre engines earn it a similar BiK banding to the diesels, and its lower fuel economy will mean it costs business users more to run.

Every Crossland X in the range costs £150 a year to tax from the second year onwards.

You might think that because the Crossland X is an SUV insurance will be more expensive, but the base petrol engine occupies group eight, so premiums should be pretty reasonable. Even top-spec models with the most powerful engines don’t go any higher than group 18, which compares favourably with many of the Vauxhall’s closest competitors.

Choose the Crossland X and you’ll get the same three-year/60,000-mile warranty offered on all Vauxhalls. This is industry standard but other manufacturers provide more generous guarantees; the Hyundai Kona gets a five-year unlimited-mileage warranty, while the Kia Stonic and MG ZS both get seven years of cover.

Vauxhall’s vast dealer network means Crossland X maintenance will be simple to arrange and monthly plans make budgeting easy. Vauxhall Care costs around £20 per month, including the first three services, three years of roadside assistance and the cost of the first MOT.