Little criticism here: the Vauxhall Crossland X is spacious and has a decent boot

In terms of metal for your money, the Vauxhall Crossland X is decent value. While it’s based on the same mechanical platform as the last-generation Peugeot 2008, it’s actually longer, taller and wider than this car. It’s not until you get to cars from ostensibly the class above like the Nissan Qashqai that you find larger measurements are the norm. 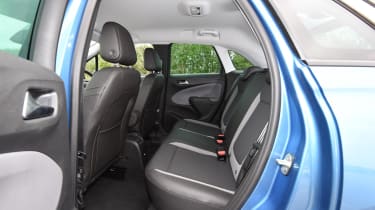 It’s all too easy to take sound ergonomics for granted, but the Crossland X deserves some recognition in this area. The central armrest is perfectly placed so your hand lines up with the gearlever, while the driver’s side door armrest is equally well judged and provides a natural angle for your elbow to rest on during a long cruise; the story’s the same with the pedals and steering wheel, although the foot rest next to the clutch could be larger and drivers with big feet may wish for a little more space.

Other plus points include excellent seats (they could do with a bit more lumbar support, but left us rested after a long drive) and well placed major switches for the infotainment system, windscreen wipers and other controls – the Crossland X is a very easy car to get to know. Two accessible and well-sized cup-holders rest in the central console and the door bins are big enough, although we feel the glovebox is smaller than it should be.

Kneeroom in the rear is generous, headroom plentiful and the Crossland X has a pleasant sense of airiness; all things considered, there’s more room inside than some cars from the class above. It should be pointed out, however, that while this sense of spaciousness will appeal to some, the eight or so inches of space above front-seat occupants’ heads is essentially wasted and the tall roof that provides this has a negative effect on the way the Crossland X drives. 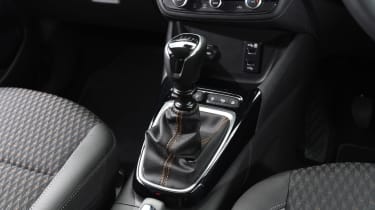 There are also a couple of ergonomic niggles worth pointing out: the release button for the handbrake sits on top of it rather than on its end, which is an unnecessary modification that adds nothing but frustration. Similarly, the selection knob for the trip computer is on the indicator stalk, and requires you to twist not the end of the stalk, but a ring in the middle of it – a fiddly manoeuvre on the move. We only mention these minor details as they’re blemishes on a car that is otherwise ergonomically excellent. 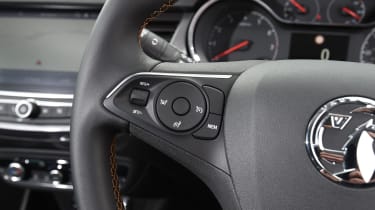 To make the Crossland X more practical, simply tick the £375 ‘Versatility Pack’ box. This adds 60:40 folding seats (we feel these should be standard), an adjustable backrest for the rear seats and a couple of other sensible features such as a ski hatch and sliding seat bases. A variable boot floor costs another £75.

At 410 litres, the Crossland X’s boot is slightly bigger than the one in the SEAT Arona but notably smaller than the one in the latest Renault Captur. It’s very well shaped though, offering an almost perfectly rectangular loading bay and virtually no lip. If you have the optional sliding rear seats, moving these forward sees space increase to 520 litres, while if you drop them the figure grows to 1,255; they don’t lie totally flat when folded, though.

The Vauxhall Crossland X probably won’t be on your shortlist if you’re planning to tow anything besides a small trailer; most models can tow a mere 840kg and the non-turbo 1.2-litre petrol is only rated for 650kg.