Conservative and orthodox are the watchwords here, but that does mean the Vauxhall Grandland X is easy to use and live with

There are parallels between the way the Vauxhall Grandland X drives and the way it looks and works inside: it’s resolutely sensible and comfortable, if a little lacking in pizzazz.

Driving position aside, the Grandland X’s interior closely resembles the Vauxhall Insignia Grand Sport. That means you face large, clear analogue dials, supplemented by a central digital display. This last item displays the current speed limit (obtained by scanning road signs with a camera) and, in turn, works with the cruise-control system, asking if you’d like to set it to the current limit. A neat trick, and one that’s standard on every Grandland X. 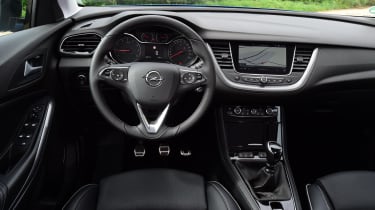 Whichever trim level you choose, you’ll find simple and clear physical dials and buttons for the climate control below the infotainment screen. Quality is generally good, with tactile soft-touch plastics in prominent places. The gearlever is less pleasing though, feeling chunkier in the hand than is ideal, and the centre-console cubby hole ahead of the gearlever seems a bit flimsy.

Vauxhall has a bit of a reputation for complicated trim levels, and the Grandland X line-up isn't as simple as that of its Peugeot 3008 cousin.

As described above, SE Premium trim includes a seven-inch infotainment screen without sat nav, but for roughly £30 less you can get Business Edition Nav trim. This brings a better eight-inch infotainment system with better connectivity and sat nav, 18-inch (instead of 17-inch) alloys, all-round (instead of rear) parking sensors and some extra safety kit, including lane-keeping assistance and autonomous emergency braking.

However, the flagship is very pricey, so we suggest choosing the Business Edition Nav and adding any options you fancy without spending the £3,500 or so extra needed for SRi Nav.

There are also four trim levels on the Hybrid4 model, which are fairly similar to the rest of the range. All cost much more than the equivalent petrol or diesel models, but there’s extra kit to make up for it with entry-level SRi Nav cars getting LED headlights, a powered tailgate, wireless phone charging and a digital instrument cluster as standard. Elite Nav and Business Edition Nav Premium (aimed at company-car drivers) add a heated windscreen, leather seats and heated front seats, while the Ultimate Nav brings an electric driver’s seat plus other extras. This top-spec version is over £45,000, however, and has the highest insurance group in the range.

Winter Pack One pairs heated front seats with a heated steering wheel and windscreen for £460, the All-Road Pack sees the fitment of mud and snow tyres plus Vauxhall’s IntelliGrip system (a sophisticated traction-control setup with mud and snow modes) for a reasonable £200, while LED headlights are £1,100, silver roof rails £100 and a detachable tow bar is £700. Those are reasonably priced options, even if Renault charges just £500 to fit LED headlights to its Megane. You can also choose to make a statement by having the roof and door mirrors finished in black paint for just over £300.