The VW Amarok features highly adjustable seats, but the engines are noisy and the suspension is bouncy

Inside, the Volkswagen Amarok again shows its utilitarian side, as engine noise does tend to penetrate into the cabin more when accelerating compared to a non-commercial vehicle, although it does settle down significantly at a cruise. The V6 diesel also sounds a bit smoother than the four-cylinder engines in the Nissan Navara and Mercedes X250d.

Getting comfortable in the Amarok is fairly straightforward, though, as there’s a good range of adjustment in the driver and front-passenger seats, so finding the best SUV-like driving position should be pretty simple. This is particularly true in the Aventura, which gets 14-way adjustable powered seats.

Inside, the Amarok is still fairly utilitarian, but the design is simple, logically laid-out and familiar to anyone who’s driven a recent VW. And while some of the plastics are a little low-rent, quality is leagues ahead of many of its pick-up rivals, such as the Mitsubishi L200 and Toyota Hilux, while slightly behind the class-leading Mercedes X-Class. 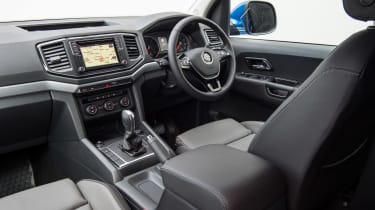 The facelifted Amarok’s dashboard is a big improvement, as it shares its appearance with the previous generation VW Tiguan. Unlike that SUV, though, there are clues to the pickup’s true nature, with a magnet next to the stereo system and also a bulldog clip – presumably to hold the list of materials to pick up from the builders’ yard, but equally handy for shopping lists. In addition, the Amarok comes with no less than three 12V power sockets (four on Highline models and above).

All Amarok models come with a variety of equipment. There are two main trim levels: Trendline and Highline, and then two Black Editions with extra equipment and black styling details.

Trendline has 17-inch alloys and a touchscreen infotainment system with DAB radio, Apple CarPlay, Android Auto and MirrorLink connectivity for your smartphone. Other features include air-conditioning, cruise control, chrome detailing and a trip computer, in addition to electric front and rear windows and a post-collision braking system.

The Highline provides a bit more luxury, as it comes with heated front seats and leather upholstery, plus a more stylish dashboard with chrome surrounds on the air vents and a light switch. The exterior also gets blinged up with 18-inch wheels, bi-xenon headlights, touches of chrome on the grille, bumpers and integrated step. In the back you also get privacy glass and there are front and rear parking sensors plus a rear-view camera to boost convenience.

One option that’s probably going to be worthwhile, considering the huge dimensions of the VW pick-up, is front and rear parking sensors. These are standard on the Highline and above, but £445 (exc. VAT) on the Trendline. Sat-nav adds £600 to the cost of the Trendline and Highline, while the Aventura’s ErgoComfort powered driver’s seat can be added to the Highline for an eye-watering £1,100.

Practical features a pickup buyer might see as essential include a towbar with electrics (£320), six folding load-lashing rings in the load bed (£40) and additional front underbody protection for £25.