The Volkswagen Golf GTD offers all the performance of the petrol Golf GTI, but with significantly reduced running costs

There’s no denying that the Volkswagen Golf GTD really does offer the best of both worlds. It has more performance than most people could ever want – offering powerful acceleration and a high top speed – plus the rock-bottom running costs normally associated with much smaller, slower cars.

Once you’ve taken into account the relatively high list price, keeping your Golf GTD on the road shouldn’t be too difficult when it comes to ongoing costs such as insurance and servicing.

Yes, the GTD is more expensive to buy than diesel-engined versions of the SEAT Leon FR and Skoda Octavia vRS. But the extra standard equipment should make the higher list price easier to stomach. And when it comes to resale time, the icing on the cake is that all GTD models are predicted to retain as much as 53% of their new value after three years. 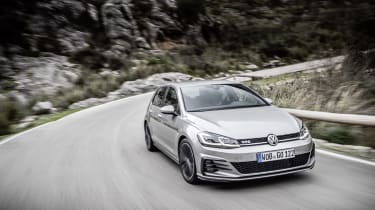 The standard three-door GTD (with a manual gearbox) returns 61.4mpg on average, whereas the thirstier GTI petrol model will do little more than 44mpg. If you choose a standard manual five-door version, the GTD’s economy drops to 60.1mpg – and it’s the same with the DSG gearbox regardless of body type.

As part of a facelift to the Golf in 2017, Volkswagen introduced a GTD BlueLine version to sit alongside the standard GTD. With smaller 17-inch alloy wheels, it has slightly improved fuel consumption and CO2 emissions figures. It’ll return 64.2mpg with a manual gearbox in three-door guise, while a figure of 62.8mpg is quoted for the automatic three-door and both five-door gearbox options.

The manual Golf GTD BlueLine three-door emits 116g/km and the five-door 119g/km of CO2. Choose a DSG gearbox and emissions are 118g/km. All versions fall into the 25% Benefit-in-Kind (BiK) bracket for company-car users.

After the first year's CO2-based road tax (generally included in the on-the-road price), all Golf GTDs cost £140 a year to tax.

The insurance rating for all three and five-door GTD models is group 27, which is five lower than the petrol GTI, but two groups higher than the BMW 1 Series 120d M Sport.

The Volkswagen Golf GTD comes with a three-year/60,000-mile warranty. You can also buy a five-year extended warranty for £565.

Servicing shouldn’t be any more expensive than for a standard Golf, thanks to the fact that the GTD shares many of its parts with lesser models in the VW range. Pre-paid service packs are also available, with a two-year maintenance plan costing around £300.