It’s a shame the Volkswagen Golf GTE references the GTI in so many ways. While it’s quite a fast car, it disappoints on country roads. The extra weight of the GTE’s batteries and electric motor take their toll on the car’s responses. The steering loses its sharpness and the car doesn’t seem to react as urgently to your inputs. 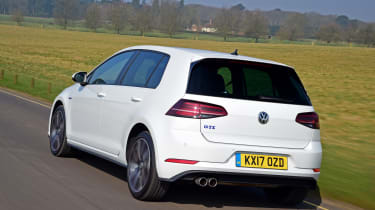 There’s plenty of grip and corners can be taken at high speed if conditions allow, but you’re left feeling rather less fulfilled as a driver than you might expect.

In terms of straight-line speed, the Golf GTE slots in between the petrol Golf GTI and diesel Golf GTD. The combination of a 1.4-litre turbocharged petrol engine and electric motor in the GTE delivers 201bhp and gets the car from 0-62mph in 7.6 seconds.

What sets the GTE apart is that the electric motor can deliver all of its power instantly means the GTE is quick off the mark when you need it to be.

However, although there’s never a shortage of power, under full acceleration the GTE can tend to stay in a given gear for longer than you might want before changing up.

The ‘GTE’ driving mode needs to be selected if you’re to exploit the car’s power to the full and it also unlocks the GTE’s 138mph top speed if your route happens to include unrestricted autobahn. The four other driving modes are the pure-electric E-mode, Battery Save, Hybrid Auto and Battery Charge. Hybrid Auto offers the best blend of performance and efficiency.

The hybrid system itself is smooth and quiet around town and although it’s basically the same as the one in the Audi A3 e-tron, it actually seems quieter and smoother in the Golf – it never feels jerky when switching between petrol and electric modes.