Building on the already talented Golf GTI, the R adds more power and four-wheel drive. It’s comfortable and enjoyable to drive, with well weighted if slightly uncommunicative steering, good grip and strong brakes. Add some of the R’s optional technical features and it gets better still.

The steering feels natural and direct, while the R sits 20mm lower to the ground than a standard Golf and 5mm lower than the GTI. This reduces body lean, but also makes the ride quite firm. It’s a pity, then, that VW chose to make its Dynamic Chassis Control, which allows you to select three different suspension settings, an £800 option.

Even more potential was unlocked by the Performance Pack, which was only available on cars with the dual-clutch DSG automatic gearbox. Visual changes include bigger 19-inch wheels and a roof-mounted spoiler, the latter of which is claimed to produce up to 20kg of downforce, increasing grip in corners. The car's top speed is increased from 155 to 166mph but the biggest upgrade in performance terms is the larger brakes, which provide remarkable stopping power.

There’s no doubt that the Golf R is an accomplished car in corners, but it still feels rather more workmanlike than the playful Ford Focus RS, and even the standard GTI, while not as fast, is just as much fun. 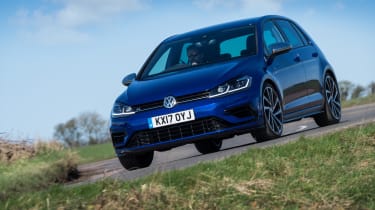 As if 296bhp wasn’t enough, a 2017 update increased that figure to 306bhp from the R’s 2.0-litre turbocharged petrol engine. This takes the 0-62mph dash down to 4.6 seconds in DSG automatic-equipped cars. And as impressive as that figure looks on paper, it’s even more eye-opening on the road.

The Golf R feels almost too fast for British roads, with its DSG gearbox serving up gears so quickly you’re at the legal limit before you know it, although the Mercedes A45 AMG is still the fastest hot hatch of all, but it’s also the most expensive by some margin. Choosing the six-speed manual gearbox are slightly slower at 0-62mph in 5.1 seconds, but you gain a much-needed feeling of involvement rather than having everything done for you.

Away from the drag strip, the Golf R accelerates smoothly on real-world roads, with little trace of the delayed accelerator response that affects some turbo cars. Like the Mercedes and the Audi S3, the Golf R is four-wheel drive. Its 4Motion system can detect when a certain wheel is losing grip and send more power to the others to compensate.

As a result, the Golf R outperforms the Golf GTI around bends as well as in a straight line. For even more fun, you can switch off the electronic stability control (ESC), which allows the car to move around a bit – but this should only be done in a controlled environment by someone who knows what they’re doing. Another switch on the centre console increases the exhaust noise from the four oval tailpipes for an even sportier soundtrack, and this can be made yet more tuneful if you add the optional titanium exhaust system. Yet, for all this technology, the Golf R is more impressive than it is loveable.