Unlike some high-performance cars, the Golf R is a thoroughly practical vehicle. It’s available in three and five-door body styles – the five-door being the more versatile and easier to use. As a result, it’s likely to be the more popular of the two with buyers. But regardless of the number of doors you choose, boot space is the same while there are plenty of useful storage spaces in the passenger compartment. 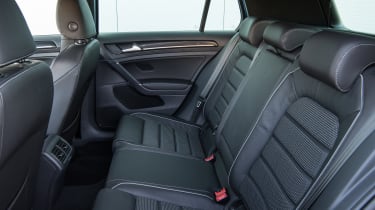 There’s more than enough space for four adults in the Golf R. A fifth would find that middle centre seat too cramped, though. Otherwise, there’s plenty of head and legroom all round. The five-door is, naturally, easier to get into – no-one has ever got in and out of the back of a three-door car with their dignity intact.

There are also plenty of useful storage solutions in the R. All the doors have large pockets lined with felt to keep things from rolling around. The front door bins will easily take a two-litre water bottle and there are cup-holders and a cubbyhole under the centre armrest, too. 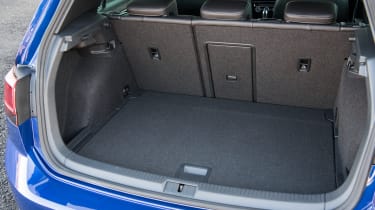 Fitting parts of the four-wheel-drive system to the rear axle has reduced Golf R boot capacity to 340 litres – 37 litres less than a standard, two-wheel-drive VW Golf. At least it’s the same capacity across three and five-door versions. The five-door Audi S3 has a 340-litre boot, too, but the three-door version can only hold 325 litres. The BMW M135i’s boot is slightly larger, at 380 litres.

With the rear seats down the Golf’s load space grows to 1,233 litres. More importantly, it’s a long and wide space with a low boot ledge, while that slightly raised floor means you don’t have to stoop too far to haul out heavy objects.