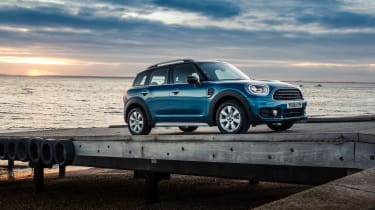 As MINI gets ready to launch the all-new MINI Countryman SUV in the UK, we’ve got full details of the latest rival to the Audi Q2, Audi Q3, BMW X1 and Mercedes GLA.

We’ve now driven the new Countryman in range-topping Cooper S ALL4 four-wheel-drive form, but there will be other petrol and diesel engine choices shared with the MINI hatchback. We also expect an ultra-efficient plug-in hybrid model to arrive later in 2017.

The new Countryman is a little bigger than the outgoing car and is styled to place renewed emphasis on the car’s rugged character. Fittingly, most models will be offered with MINI’s ALL4 four-wheel-drive system. Buyers will also have the choice of either a six-speed manual or a six-speed dual-clutch automatic gearbox with steering-wheel shift paddles. There’s a host of new technology in the Countryman, as well as an all-new interior and considerably more space for the driver, passengers and luggage thanks to the size hike over the previous model.

The new Countryman launches in the UK on 11 February, starting at £22,465 for the basic Cooper model, while the top-spec Cooper SD version begins at £28,430.

The new MINI Countryman is on sale now – you can read our review here.

The new MINI Countryman is 200mm longer and 30mm wider than before. Its off-roader looks come courtesy of chunky bumpers and black plastic cladding around the door sills and the wheelarches, which are conspicuously flared. A strong character line enhances the car’s shoulders and rear haunches. All UK cars also get silver roof rails and exterior trim beneath the doors. 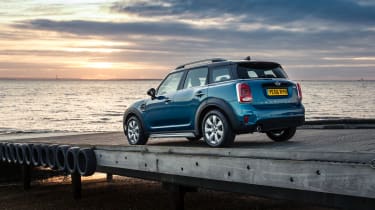 Fans of the MINI hatchback will recognise the large rear light clusters, and while the Countryman’s grille is both taller and wider than the hatchback’s, it’s in the same hexagonal style. As with all MINIs, customisation will be a key element of the Countryman’s appeal.

Much of the new interior design is taken from the smaller hatchback, including the large central infotainment screen, the instrument dials and the familiar toggle switches on the centre console. However, the portrait-orientated air vents and ambient lighting are both unique to the Countryman. 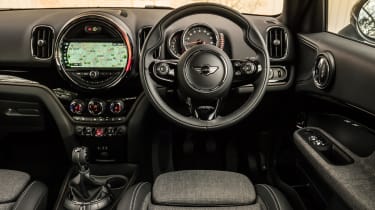 Meanwhile, the dashboard is much chunkier and more substantial than either the hatchback or the previous Countryman, in keeping with the new car’s image as a more grown-up SUV.

There’s been a significant jump in size from the previous incarnation of the MINI Countryman to this second-generation model. This includes more interior space, with the driver and front passenger enjoying more head and shoulder room, while in the back there are now three useable seats which split and fold individually. These can slide forward and back by up to 130mm, depending on whether you need to prioritise rear legroom (up 50mm over the Mk1’s) or boot space. 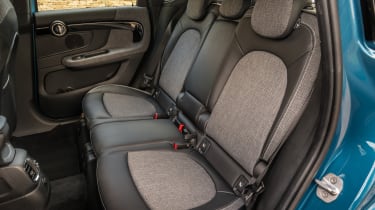 Boot space is unchanged at 450 litres and once the rear seats are folded flat, this grows to 1,309 litres. To make it even easier to get stuff in and out of the boot, you can get a hands-free boot opening, operated by waving your foot under the rear bumper – useful if you have your arms full. 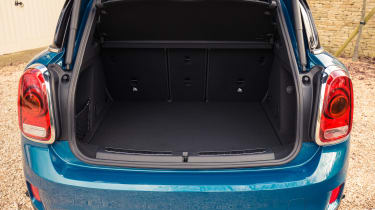 There are also more storage spaces for the passengers, with each door providing enough space for a one-litre drinks bottle.

There will two trim levels to choose from at launch: Cooper and Cooper S. The Cooper, which starts at £22,465, comes with 16-inch alloy wheels, rear parking sensors, sat nav and Bluetooth connectivity. Upgrade to Cooper S (priced from £24,710) and you get 17-inch alloys and part-cloth, part-leather upholstery, as well as more engine power, whether you’ve chosen petrol or diesel.

All Countryman models have the MINI Visual Boost Radio, which includes a 6.5-inch colour display operated by the control wheel on the centre console. Also available is MINI Connected, which links your iPhone or Apple Watch to the car’s infotainment system. It enables you to set a meeting in your device’s calendar and the car will automatically set the sat nav to take you there. It also learns your usual routes and will alert you of any delays along them. Sadly, it’s a feature denied to Android phone users.

Another, somewhat more gimmicky feature is the MINI Country Timer, which measures how much time you’ve spent driving off-road and grades you depending on the amount of time and the severity of the driving challenge. You progress through various levels, from ‘Street Cruiser’ to ‘Cliff Champion’, at which point the MINI icon in the infotainment screen grows to show the MINI Countryman monster truck.

As with most MINI ranges, the Countryman will be available with a vast array of extras and option packs. These include an uprated infotainment system with a bigger, 8.8-inch screen, a higher-specification sat-nav system and a Harman Kardon stereo.

MINI says around 80% of Countryman buyers will add the Chilli Pack, which includes climate control, LED headlamps and sports seats up front, among other equipment. If bought separately, these extras would add up to £4,130, but the Chilli Pack costs £2,980, saving £1,150.

You can also add wireless mobile phone charging, different interior trim and a multitude of sporty exterior details, as well as sportier suspension and larger wheels.

Initially, the new MINI Countryman will be available with a choice of four engines – two petrols and two diesels. The least-expensive petrol Cooper will come with a turbocharged 1.5-litre three-cylinder engine, producing 134bhp and capable of 0-62mph in 9.6 seconds. It manages a claimed average of 51.4mpg and has CO2 emissions of 126g/km, which means a £110 in road tax (if registered before 1 April 2017).

The petrol Cooper S will be the fastest model in the range initially, completing the 0-62mph sprint in 7.5 seconds. It returns a claimed 45.6mpg from its 189bhp turbocharged 2.0-litre petrol engine and puts out 141g/km of CO2, so VED is £145 under the current system.

The two diesels are the cheapest to run until the plug-in hybrid arrives later next year. Both are fitted with a 2.0-litre engine, developing 148bhp in the Cooper D and 187bhp in the Cooper SD. They manage a claimed average of 64.2 and 61.4mpg respectively, with CO2 emissions of 113g/km and 121g/km that result in £20 and £110 in road tax if registered before April 2017. The more powerful diesel is capable of 0-62mph in just 7.7 seconds, while the less powerful model covers the benchmark in 8.8 seconds.

The Cooper SD is available only as an automatic, while the rest of the range comes with a manual gearbox as standard. In those models, the twin-clutch automatic, complete with steering-wheel shift paddles, is a paid-for option.

The new Countryman plug-in hybrid will be the first-ever hybrid MINI when it’s launched later in 2017. It’ll be capable of driving on electric power alone for up to 25 miles, after which the 134bhp 1.5-litre petrol engine will take over. Called the MINI Cooper S E Countryman, it’ll have a petrol engine that powers the front wheels and an electric motor for the rears to give four-wheel drive.

Buyers will also be able to switch the car between different modes, depending on whether they want to charge the battery while driving, use battery power only (up to speeds of 78mph) or combine the petrol and electric motors to give maximum power. 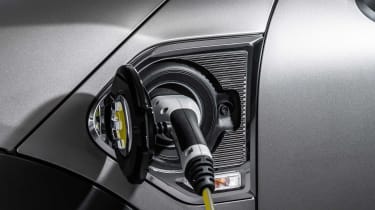 A combined total power output of 221bhp enables the hybrid Countryman to do 0-62mph in just 6.9 seconds. MINI says it can return around 134mpg and it emits just 49g/km of CO2, making it exempt from road tax (if registered before April 2017) and the London Congestion Charge, and putting in the lowest, 7% band for Benefit-in-Kind (BiK) company car tax. Depending on the charging station you use, the batteries will take around two or three hours to charge.