The Hyundai Kona offers reasonable economy but its not class-leading

The standard Kona is available with two petrol engines, but the more powerful of the pair is only offered in the top-spec model. A hybrid and electric version of the Kona are also available, and the hybrid is arguably the best all-rounder in the Kona range. The fully-electric Kona will be the most desirable version in the range for many customers, but it's expensive and there's a long waiting list to get one.

Of the conventional powertrains, the 1.0-litre petrol engine will be the most popular choice and keeps the Kona in touch with rivals in economy terms. The 1.6-litre petrol turbo trails equivalent engines in the competition, partly because it’s only available with four-wheel drive. 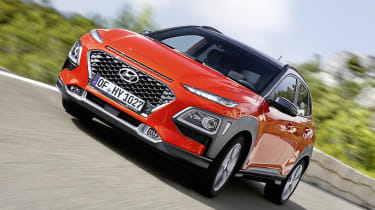 The 118bhp three-cylinder 1.0-litre petrol engine returns the best figures in entry-level S trim, because this model has smaller, 16-inch alloy wheels compared to the other cars in the range. With the car in this configuration, the engine is capable of up to 45.6mpg with CO2 emissions of 142g/km, making it the least expensive in the Kona range for company-car drivers.

Move up to any of the higher trim levels and you get at least 17-inch alloys, which means figures for the 1.0-litre engine drop to 44.1mpg and 146g/km of CO2.

The 175bhp 1.6-litre petrol engine is only available in the range-topping Premium GT model with an automatic gearbox. It comes with 18-inch alloy wheels and four-wheel drive, which, combined with the extra power, reduces fuel economy down to 33.6-34mpg and increases CO2 emissions to 189-190g/km placing it at the top of the BiK ratings for company-car drivers.

Although this Kona is at least 30bhp up on most of its equivalent rivals and has the benefit of four-wheel drive, it still doesn’t compare favourably to alternatives like the automatic SEAT Arona or Citroen C3 Aircross, which manage far lower CO2 emissions of 134 and 141-154g/km respectively.

All petrol versions of the Kona cost £150 a year in road tax with the exception of the Kona Electric, which is exempt from road tax due to its zero-emissions status. The Kona Hybrid costs £135 per year to tax.

The Hyundai shares its insurance rating with the closely related Kia Stonic, with the entry-level 1.0-litre occupying group 10, while the range-topping 1.6-litre is in group 19. This means the Kona is likely to be a little more expensive to insure than the Renault Captur, which spans insurance groups 16 to 19.

Hyundai offers one of the best warranties available on new cars. The Kona is covered for unlimited miles over five years, which, depending on how much driving you do, isn't far behind Kia’s seven-year/100,000-mile warranty.

Hyundai offers fixed-price servicing packages, meaning budgeting for maintenance will be easy. Three years’ worth of services for a petrol Kona is likely to come in at around £500.