"The Maserati GranTurismo is much more stylish than any German rival" 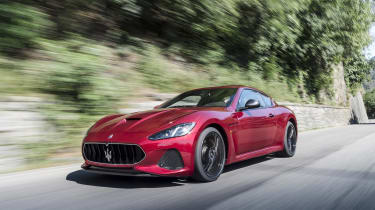 The Maserati GranTurismo is one of the best-looking cars on sale today thanks to its low stance, gaping front grille, bulging wheelarches and kicked-up tail - you wouldn’t think from looking at it that it’s been in production for well over a decade. It's not just built to look good, though – the GranTurismo makes an excellent long-distance companion if you can afford the fuel bills, with a powerful engine and spacious rear seats. It competes with cars such as the Jaguar F-Type, BMW 8 Series and Porsche 911.

While there used to be two engines to choose from, a recent facelift did away with the 4.2-litre entry-level model, leaving just the 4.7-litre V8. At the same time, a subtle redesign saw the front grilles and bumper reshaped, helping the GranTurismo cut through the air more cleanly.

The facelift also upgraded the infotainment system, which now comprises a crisp 8.4-inch screen and has improved smartphone connectivity; the centre console also came in for a makeover.

Maserati offers two core types of GranTurismo. Both the GranTurismo Sport and the MC produce 454bhp and get from 0-62mph in under five seconds, but the MC is designed to look sharper and offer a more focused drive.

The Maserati GranTurismo will be expensive to run; even 20mpg is difficult to achieve

After the first year's CO2-based road tax (generally included in the on-the-road price), every version of GranTurismo costs £145 a year to tax. With a list price (including options) of comfortably more than £40,000, it’s liable for an additional surcharge of £320 a year in years two to six, bringing the annual bill to £465 during that period. 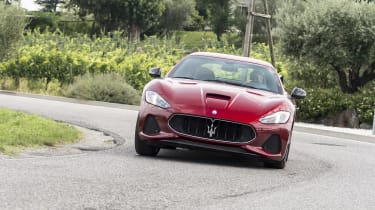 Fuel economy is definitely not a strong suit either, with consumption officially pegged at 19.8mpg - and that’s according to the outdated NEDC cycle, which produced figures that were extremely hard to achieve in real-world driving. CO2 emissions are an eye-watering 331g/km. Expect insurance to come in at four figures, and don’t forget to budget for a tracker service, which you’ll almost certainly be asked to fit and subscribe to.

The star of the GranTurismo show is unquestionably its engine

Whichever model you choose, the GranTurismo’s 4.7-litre naturally aspirated V8 is a joy. It’s really a Ferrari engine – and one that can trace its roots back to the mid-nineties. While we’d normally balk at such an old engine, the noise and power it delivers make it something of a classic, and emissions regulations mean it’s not long for this world, so enjoy it while you can. A six-speed automatic gearbox and rear-wheel drive are the only available combination.

Out on the road, the GranTurismo is true to its name – it’s built first and foremost as a continent-crossing grand tourer. It feels significantly heavier and larger than a Porsche 911, for example, and isn’t as agile when cornering as a result. 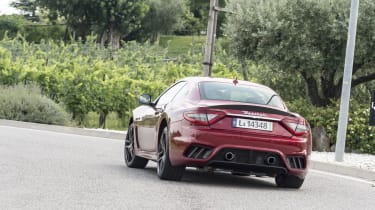 All things are relative, however, and the GranTurismo is still capable of a significant turn of speed, even if its relatively old-fashioned six-speed automatic gearbox lacks the speed and effectiveness of more modern, dual-clutch affairs. Any misgivings you may have about some of the less contemporary aspects of the GranTurismo are forgotten once the engine is in full voice, though.

Before the facelift arrived, fastest of all the Maserati GranTurismos was the MC Stradale (note this is different from the GranTurismo MC), which is a significant 110kg lighter than the rest of the range thanks to carbon-fibre seats, hi-tech wheels and brakes, plus other weight-saving measures. The MC model is a little lighter than the Sport, so manages 0-62mph in 4.7 seconds (a tenth of a second quicker than the Sport) and is the most focused car in the range, but it's less comfortable as a result.

Skyhook adaptive dampers are worth having

Climb inside the Maserati and you’re greeted by the kind of luxurious interior you'd expect of an £90,000 GT car. While the overall design is starting to look and feel a little dated (the climate control buttons in particular give away the car’s age), there’s plenty of high-quality leather on show and optional Alcantara upholstery. 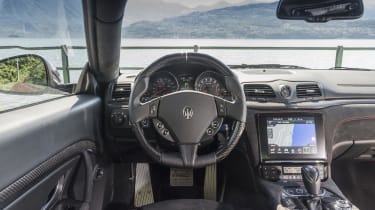 Interestingly, while the cheaper Sport model gets Skyhook adaptive suspension as standard, it’s an expensive optional extra on the more focused MC model. Either way, we recommend Skyhook, as it allows the Maserati to offer a comfortable ride as well as excellent high-speed cornering ability. Other options include paint and leather colour choices, carbon-fibre trim pieces, a black exterior pack and a carbon-fibre bonnet.

The facelift introduced an 8.4-inch infotainment system with a capacitive touchscreen, overhauling the technology inside the GranTurismo. It brings with it the handy ability to use Apple CarPlay or Android Auto, as well as boosted audio quality thanks to a Harman-Kardon stereo. The new system has also resulted in a redesigned centre console, featuring a double rotary control knob wrought in forged aluminium and the drive-mode selector moved next to the gearlever.

You wouldn't expect the GranTurismo to be the most practical model ever built, but its rear seats are bigger than most sports cars'. Electric sliding front seats mean access is easier than you might imagine, while there are climate control vents in the back of the central armrest. Maserati claims the GranTurismo offers class-leading head and legroom.

Although the dashboard is stylish to look at, it lacks the clear layout of cars such as the Mercedes SL or Porsche 911. The 260-litre boot is also quite small when you consider the Mercedes has total luggage capacity of 364 litres.

The GranTurismo is well made

Not enough Maserati GranTurismo owners provided feedback for it to feature in our recent Driver Power owner satisfaction surveys, although we've heard of few major problems. With expensive sports cars such as the Maserati, it pays to keep up with maintenance – a fully stamped service book will add a lot of value to the car when you come to sell it. 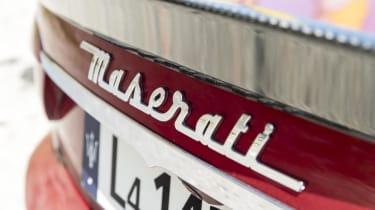 The Maserati's rarity also means it hasn't been crash-tested by Euro NCAP, but it does get six airbags, traction control, electronic stability control and hugely powerful brakes that give it excellent stopping power. 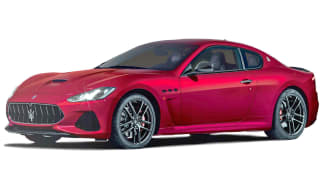 Show me:
Makeover and new technology for 2018 Maserati GranTurismo 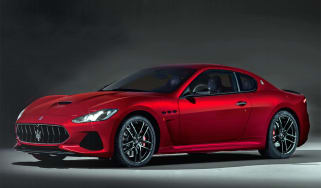