“The Scout has a raised ride height, four-wheel drive and butch-looking body protection for those seeking a more rugged Octavia Estate”

The Scout adds an extra dimension of practicality to the already capable Skoda Octavia Estate. On top of its big boot and comfortable road manners, the Scout is well suited to uneven roads and rough tracks that would spell journey’s end for the regular car. Its increased ride height and tough-looking body cladding give the game away that this is no ordinary Octavia and its four-wheel-drive system adds substance beneath the style.

As with other Octavias, the Scout received a raft of improvements in 2017, including a sharp new split-headlight look at the front, as well as much-improved infotainment technology inside. The changes weren’t strictly necessary – the Octavia was already a smart car with an upmarket feel – but ensure that rivals such as the Volkswagen Golf Estate and Ford Focus Estate don’t get the upper hand.

It’s easily argued, though, that the Scout doesn’t have a direct rival at all. All the other four-wheel-drive estate cars, including the mechanically related Volkswagen Golf Alltrack, are considerably more expensive than the Skoda. The Subaru Outback, Audi A4 Allroad and Volvo V60 Cross Country are worth a look if you’ve got a bit more money to spend, though. 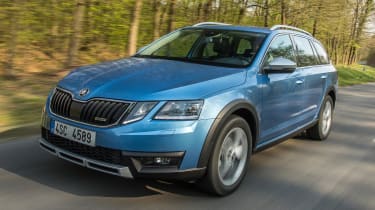 Although the Scout emphasises all-weather grip on the road rather than venturing too far off it, Skoda has made sure it isn't totally out of its comfort zone away from the beaten track. Along with the 30mm increase in ride height, the bumpers – complete with tough-looking silver scuff guards – have been shaped to allow obstacles to pass beneath them. Skoda even goes as far as publishing the Scout’s ramp departure angles like those issued for serious off-roaders.

There’s also extra underbody protection for the brake and fuel lines, electronic differential locks on both axles to help you to get moving on slippery surfaces and an off-road mode that acts as a kind of slow-speed cruise control for creeping over rough terrain. All this makes the Octavia Scout an extremely useful estate, but don’t be under any illusion that it’s an SUV. After all, the Skoda Kodiaq is also available for those whose active outdoor lifestyle regularly takes them away from the tarmac.

Inside, the infotainment system was brought up-to-date in 2017 with a glass capacitive touchscreen for better response. It looks a lot smarter, too, and adds a bit of gloss to what’s already a very plush and well assembled interior, but we wish there were also a few physical buttons to make navigating its menus easier.

Skoda offers the Scout with a 148 or 181bhp diesel engine. The less powerful car comes with a manual gearbox, while the more powerful one is dual-clutch automatic only. For a four-wheel-drive car, both engines return reasonable fuel economy and CO2 emissions figures, while the 181bhp model’s 0-62mph time of just 7.8 seconds is pretty quick, too.

The 148bhp is our pick, because it feels powerful enough and costs several thousands pounds less, making it much better value. The increased ride height allows a little more body lean in corners, but the Scout has lots of grip and still feels agile for a practical estate.

With four-wheel drive also available on the SE L model, whether you choose a Scout over a regular Octavia Estate should depend on whether you need the extra ground clearance or are particularly taken by its tougher looks. It doesn’t cost a lot more, though, and we reckon this outdoorsy Octavia makes a sensible alternative to a full-on SUV.

The Skoda Octavia finished 10th out of the 75 cars ranked in our 2018 Driver Power owner satisfaction survey of cars currently on sale in the UK. While the facelifted version of the Octavia hasn’t been crash-tested by Euro NCAP, the family-orientated Skoda was awarded five stars in 2013.

Because it’s only available with four-wheel drive, the Octavia Scout uses more fuel and emits more CO2 than most other cars in the Octavia range, so company car drivers will pay a 28% Benefit-in-Kind rate, while standard diesel Estates can get as low a rate as 22%. The 148bhp Scout is capable of 56.5mpg, while the 181bhp engine returns 55.4mpg. For comparison, a front-wheel-drive Octavia Estate will return 65.7mpg with the 148bhp diesel engine, while the 181bhp vRS Estate model still manages 62.8mpg. 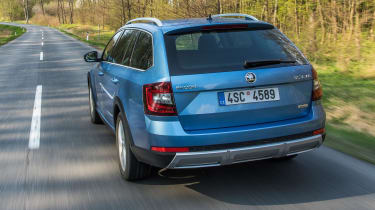 The Vehicle Excise Duty (VED) system sets annual road tax for every new Skoda Octavia at £140 – the same figure as almost every car on sale under £40,000, save hybrid, zero-emissions electric and hydrogen models.

Other running costs are more impressive: Skoda offers a three-year/60,000-mile warranty with the Scout, and you can extend this up to five years and 100,000 miles for around £500. Fixed-price servicing means the first two services will cost you just £280, while the Scout’s rarity should ensure it retains 40% of its value after three years or 36,000 miles of ownership.

The Skoda Octavia Scout is an impressive performer

If you want a manual gearbox, you’ll have to choose the 148bhp model, as the more powerful 181bhp engine is only available with Skoda’s automatic DSG gearbox. Both engines are smooth and quiet on the move, although they do rattle a little when starting from cold.

Whichever engine you choose, the Octavia Scout feels fast enough. The 148bhp model’s 0-62mph time of 9.1 seconds might not sound that quick, but it has plenty of power for motorway overtaking, and it's our recommendation. The 181bhp engine comes from the performance-orientated Skoda Octavia vRS, so it feels pretty swift – confirmed by a 0-62mph time of 7.8 seconds, but we’re not sure that its increased running costs are a sacrifice worth making for this performance gain.

And while that extra power is easily deployed in the low-slung, sporty vRS, the taller Scout feels less suited to such a powerful engine. The increased ride height brings with it a greater tendency to lean in corners, and light, vague-feeling steering doesn’t encourage you to race into corners. However, adopt a more relaxed driving technique and the Skoda is a real pleasure to travel in, thanks to a comfortable, smooth ride and excellent seats. There’s also plenty of grip, and the Octavia Scout feels agile enough to take on challenging roads, despite its size. 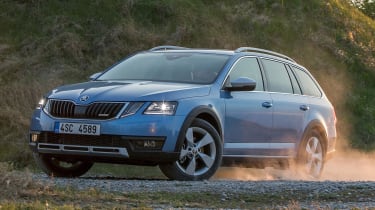 As relaxed cruising is really the Scout’s forte, the 181bhp engine is only really worth considering for the excellent DSG dual-clutch automatic gearbox it comes with. However, while the latter certainly makes driving effortless, the six-speed manual gearbox is very good and the more economical 148bhp engine is more than adequate.

Key to the Scout package is its four-wheel-drive system, which makes amends for the handling limitations imposed by that 30mm ride-height increase. The system aims to provide greater traction on loose or slippery surfaces, while the added ground clearance means that rugged tracks can be negotiated. It’s nothing like a true off-road capable SUV – a Land Rover Discovery will go far deeper into the jungle – but for launching a boat from a damp slipway, crawling towards a snowy mountain retreat or freeing a caravan from a soggy campsite, the Scout is a more versatile beast than its regular Octavia stablemates. There’s also clever technology to help anyone master off-road driving, including hill-descent control, which is a bit like cruise control for steep hills.

The Octavia Scout has a spacious and well built interior

As befits a model that sits at the top of the Octavia range, the Scout gets the same sophisticated suspension setup as the Skoda Octavia vRS. This does a great job of smoothing out bumps, making the Scout more comfortable to drive than the standard Octavia Estate. Road and wind noise are minimal, although the Volkswagen Passat Alltrack estate is even more hushed.

While the Scout comes with a host of extra equipment, the interior looks similar to the standard Octavia Estate’s. That’s no bad thing, as you get a solid, easy-to-use dashboard that’s built using high-quality materials, and includes a touchscreen sat-nav and infotainment system with a responsive capacitive glass screen, as well as a wi-fi hotspot. For £450 you can also upgrade the standard instruments to Skoda's Virtual Cockpit instrument display, with five different layouts to scroll through. The Scout also comes with subtle Scout badging, rear parking sensors, cruise control and a digital radio. Alcantara seats look expensive, adding to the quality feel. 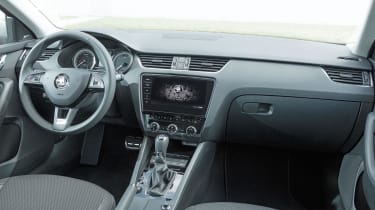 It’s easy to get comfortable in the Octavia Scout thanks to a height-adjustable driver’s seat, together with a steering wheel that adjusts up and down, as well as in and out. The raised ride height means visibility is improved over the standard car, while those after an even easier life can specify the optional parking assistance system, which costs £450 and effectively parks the car for you.

The Octavia Scout estate’s 610-litre boot is one of best in class. Only the Peugeot 308 SW has a bigger boot, while the Peugeot’s interior isn’t as well designed as the Skoda’s. 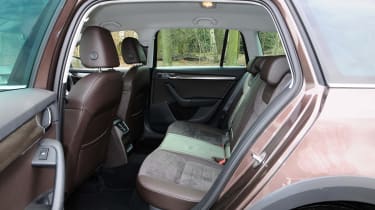 Folding the rear seats in the Octavia Scout reveals the same 1,740-litre load area as the standard car, beating the Volkswagen Passat Alltrack (1,731 litres) in terms of outright luggage space. Further practicality is to be found in the boot’s false floor (which is perfect for securing valuables), while the front passenger seat can be specified with a backrest that folds flat, to help with carrying very long loads.

Rear passenger room is excellent, the only caveat being a pronounced hump in the centre of the floor that restricts legroom somewhat for any middle passenger. 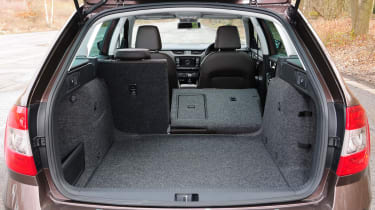 While the four-wheel-drive system adds weight and dents efficiency, it does increase towing capacity. The Octavia Scout is capable of towing 2,000kg, compared to the standard Estate’s 1,800kg capacity.

The Octavia Scout is extremely safe and reliable

Buyers after peace of mind need look no further than the Octavia Scout. The Skoda Octavia was rated highly for reliability in our 2018 Driver Power owner satisfaction survey of cars currently on sale in the UK. Of the owners who responded, 7.3% reported experiencing a problem with their car at least once. It seems unlikely that the Czech company will let you down.

Safety is another Scout strong suit: a five-star Euro NCAP crash-test result is excellent, while the extra grip offered by four-wheel-drive means you’re less likely to find the car scrabbling about in slippery conditions. There are also a number of advanced features available, including blind-spot warnings and technology to help prevent the car straying from its lane on the motorway. Autonomous emergency braking (AEB) applies the brakes automatically if an imminent collision is detected, helping to avoid or mitigate crashes.

The Octavia Scout seems great value when compared to rivals

While it costs roughly £3,000 more than a two-wheel-drive Octavia Estate with the same engine, the Scout comes with a generous list of equipment before you take account of the leather seats, raised ride height and chunky bumpers that set it apart from the rest of the range. The Scout is also unquestionably cheaper than its main rivals, undercutting the Volkswagen Golf Alltrack by some margin. 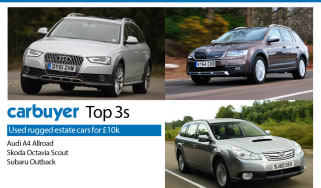 “Dear Carbuyer, I need an estate car that can handle the outdoors, that’s family friendly and good to drive. What does £10,000 buy?”
Revised Subaru Outback revealed 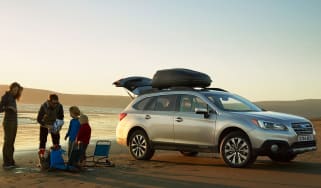