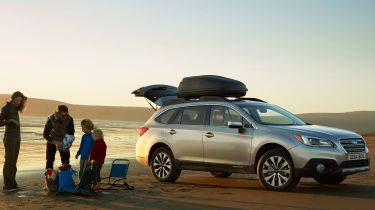 Life for the Subaru Outback used to be so much easier. Back in 1994, it was one of the first cars to offer four-wheel drive and raised suspension in a conventional estate body. That made it an instant favourite with farmers, country dwellers and anyone that regularly encountered slippery roads and muddy tracks.

Now, however, there's a whole range of rivals for the latest Outback to contend with. You can choose from a host of new models, including the smaller Volkswagen Golf Alltrack, SEAT Leon X-perience and Skoda Octavia Scout, not to mention four-wheel-drive equipped BMW xDrive, Mercedes 4MATIC and Volvo Cross Country models.

The fightback is on, though, and it comes in the form of a new Subaru Outback. The car gets revised looks, a (much-needed) boost in interior quality, and (on some models) standard automatic emergency braking.

It'll take a well-trained eye to spot the differences between the latest Outback and the car it replaces, but it has a new grille, front bumper and headlight design, while the car’s profile is, according to Subaru "a subtle evolution of the existing Outback".

Things have taken a hike upmarket inside, too, although we'll have to sample it for ourselves to see how it fares against rivals. We're told, however, that plastic quality has been improved throughout and there's also more passenger space.

Anyone who used the old (and clunky) Pioneer aftermarket sat-nav system will be glad to hear it's been scrapped in favour of a factory-fitted unit. We imagine it'll integrate better with the rest of the interior – the Pioneer always felt like a bit of an afterthought.

Buyers can choose from two engines – a 148bhp 2.0-litre diesel or a 163bhp 2.5-litre petrol. Both have a 'boxer' layout, with a lower centre of gravity than a conventional engine for nimbler handling in corners.

The diesel's lower running costs should make it the most popular of the pair, however its CO2 emissions of 145g/km mean it'll cost more to run than diesel rivals such as the Skoda Octavia Scout (124g/km) and BMW 3 Series xDrive (128g/km). Choosing the quicker petrol model hikes CO2 emissions up to 161g/km.

Fitting your Outback with Subaru's Lineartronic (CVT) automatic gearbox also increases running costs, but it does mean you get automatic emergency braking as standard. Unlike more basic systems, Subaru's EyeSight uses two cameras (not one) to scan the road ahead. It can detect not just other cars, but also pedestrians, cyclists and large animals. It comes complete with active cruise control and a lane-departure warning system.

Subaru has forged a strong relationship with the country set – its cars were first sold in the UK through agricultural suppliers, after all. Their proven ruggedness means they're likely to remain popular in this market. For everyone else, though, we think the Outback is a niche product that's outgunned (in most respects) by its more conventional four-wheel-drive rivals.

The new car goes on sale in April and will be priced from £27,995 to £32,995 – the same price bracket as the outgoing car. For all our reviews of the Subaru range, visit the Carbuyer Subaru reviews page.