"The SsangYong Turismo MPV is undeniably great value for money, but cheap plastics and a poor driving experience still let it down" 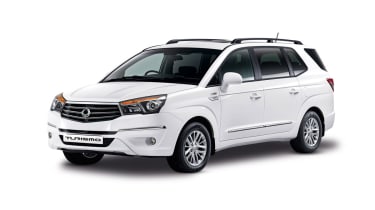 The current SsangYong Turismo is better than its predecessor, the SsangYong Rodius, in pretty much every area. The Rodius received a lot of stick for its ugly styling and poor performance, but SsangYong has learned from its mistakes and transformed the big MPV into an affordable and practical vehicle. It's not much fun to drive and there are still some cheap plastics inside, but there's plenty of space and a very affordable price tag. Growing families will find a lot to like about the SsangYong Turismo MPV.

The SsangYong Turismo can be an expensive car to run

Despite its budget price, the SsangYong Turismo can be an expensive car to run. SsangYong has fitted a 2.2-litre diesel engine to the car, which comes with either a six-speed manual or seven-speed automatic gearbox. It's not particularly efficient, though: fuel economy doesn't top 40mpg, even with two-wheel drive and a manual gearbox. Annual road tax costs a reasonable £140, but CO2 emissions of 189-205g/km place the Turismo in the top 37% Benefit-in-Kind (BiK) band, which could sting business users looking to run the large MPV.

The SsangYong Turismo's driving experience has been vastly improved from that of the old Rodius. Its gearbox is sourced from Mercedes and there's very little engine noise inside – even at high speeds. The improved suspension also does a good job of soaking up bumps in the road. Unlike a lot of its rival MPVs, the SsangYong Turismo is also available with a grippy four-wheel-drive system.

The body isn’t quite so solid, though, and you can feel it flex, thud and creak every so often. Slow steering means it isn’t as responsive as you’d want it to be when turning and there’s a fair bit of body lean when going around corners.

The interior is well built, but there are still some cheap-feeling plastics

One big criticism of the old SsangYong Rodius was its interior comfort and this improved massively with the SsangYong Turismo. Adults as tall as six feet will have no problem with head and legroom because all three rows are spacious. What's more, because there are only two seats in the second row, you can climb straight into the back, as the gap between them is so big.

More soft-touch plastics and a leather steering wheel have been added, but there are still a number of cheap and shiny finishes. Much of the interior reflects the car's budget price, but it does seem well built enough to handle most of what the average family could throw at it.

Despite its low price, the SsangYong Turismo is absolutely huge

There’s plenty of space to store your luggage and shopping in the SsangYong Turismo’s impressive 875-litre boot. Fold the second and third-row seats down and this expands to an absolutely massive 3,146 litres – that's much bigger than the Land Rover Discovery's and considerably more than you'll find in a Ford Galaxy.

There’s a seven-year 150,000-mile warranty to put your mind at ease

SsangYong doesn't sell enough cars in the EU to warrant a full Euro NCAP crash-test, so we can't be certain how well its cars will hold up in a crash. The Turismo comes with plenty of airbags and traction control – and the latter should keep all four wheels firmly planted to the ground.

It also has both anti-lock brakes and electronic stability control that prevents the wheels from locking and skidding under heavy braking. Grippy four-wheel drive is also available, for added reassurance in wet or icy conditions.

A seven-year/150,000-mile warranty should keep your mind at ease, while SsangYong dealerships are also becoming more common in the UK – there are over 75 of them now.

Recent improvements mean the SsangYong Turismo is well worth its price tag. It comes with heated leather seats, sat nav and air-conditioning, while optional extras include DAB digital radio, satellite navigation and metallic paint. When you consider that generous seven-year warranty and the fact that the entry-level Turismo is around £7,000 cheaper than the equivalent SEAT Alhambra, high bills don’t seem quite so bad.

If you want to transport seven people as easily as possible and in as much comfort as you can, you’ll find the right in our run-down of the 10 best la…
2018 SsangYong Turismo: largest MPV on sale gets a facelift 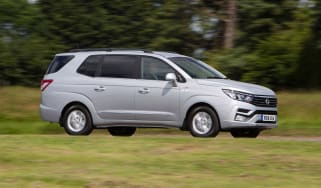 2018 SsangYong Turismo: largest MPV on sale gets a facelift