The BMW 4 Series coupe has sublime handling and punchy engines 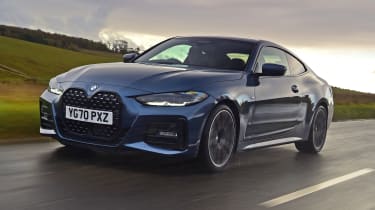 While its looks may be polarising, existing BMW customers and brand newcomers are unlikely to be disappointed by the way the 4 Series drives. Its shared DNA with the excellent 3 Series is clear from the moment you pull away, thanks to a supple ride that feels sophisticated at lower speeds. Even in Sport mode and once the pace increases, the suspension does a good job of staying composed over rougher roads, making it a relaxing car in which to cover miles quickly.

Some loyal BMW fans may baulk at the idea of four-wheel drive in top versions, but clever torque vectoring technology and an M Sport differential for the rear axle means the 4 Series has improved traction without sacrificing its playful rear-wheel drive feel. A clutch only sends power to the front wheels when it's necessary, so most of the time xDrive versions feel rear-driven.

The petrol line-up starts with the 420i, which is likely to be a popular choice as diesel sales continue to fall. It uses a turbocharged 2.0-litre with 181bhp and rear-wheel drive, getting it from 0-62mph in 7.5 seconds. Like every 4 series, it's fitted with an eight-speed automatic 'Steptronic' gearbox.

Regardless of its entry-level status, the 420i demonstrates the brilliance of the 4 Series chassis. On twisty roads it gives the driver a sense of connection to the car, with accuracy and poise when turning into a corner. Plenty of grip makes it feel secure on the road.

It’s very refined too. Our test car was fitted with 18-inch alloy wheels and adaptive suspension, the latter doing a great job of reducing the impact of major road imperfections. Even on the worst road surfaces, the suspension manages to smooth out any potential crashes or rattles.

The steering is a weak point, a trait that is shared with the 3 Series, with a lack of feel as to what’s going on with the front wheels. The switchable driving modes hinder the situation further still, with the steering’s heaviest setting feeling out of sync with the rest of the car’s dynamics. It’s still very precise though, and equally as good as rivals. 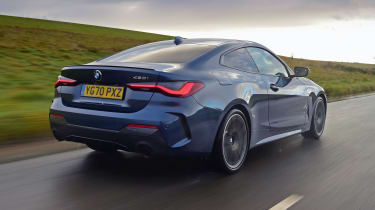 The range-topping engine is a 3.0-litre straight-six badged M440i xDrive, with 369bhp and four-wheel drive. Prices jump up to above £50,000 but the 4 Series feels seriously quick in this guise, dispatching 0-62mph in a scant 4.5 seconds - just half a second off the pace of the outgoing BMW M4.

Virtually mirroring the petrol offerings, the diesel range kicks off with the 420d, which is likely to remain a popular choice for high-mileage drivers. It has 187bhp and impressive 400Nm of pulling power (100Nm more than the 420i can muster), so it gets to 62mph from a standstill in 7.1 seconds. A 430d xDrive is set to arrive in Spring 2021, with 282bhp and 5.2-second 0-62mph time - making it not that much slower than the 4.7 seconds managed by the upcoming M440d xDrive with 335bhp.