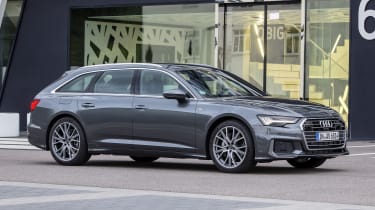 In a class so heavily targeted at highly taxed company-car buyers, efficiency and CO2 emissions are vital to a model's success or failure. The big German does well here thanks to a frugal entry-level diesel engine, which is sure to make up the bulk of A6 Avant sales. For private buyers, or those with a bigger monthly budget, there's also a powerful 3.0-litre TDI with stonking performance.

Opt for the sensible, 2.0-litre four-cylinder turbodiesel with mild-hybrid technology (badged 40 TDI) and fuel economy is 48.7mpg, with CO2 emissions of 153g/km. That's as long as 18 or 19-inch alloys are fitted, because upgrading to 20-inch wheels sees running costs creep up slightly to 46.3mpg and 161g/km, but all diesel A6s occupy the top Benefit-in-Kind (BiK) band of 37%. The Mercedes E-Class Estate could be cheaper still, though, with the same MPG figures but CO2 emissions of 129g/km - giving it a 33% BiK rate. 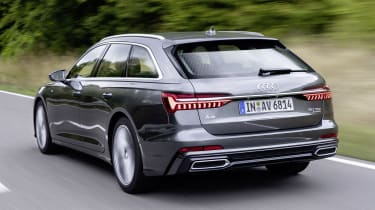 Company-car drivers are unlikely to choose the 3.0-litre 50 TDI quattro model, but figures of 39.2mpg and 188g/km aren't awful for such a large and fast estate that's also equipped with quattro four-wheel drive. These figures have been calculated under the latest WLTP fuel economy measurement programme, before conversion to the previous NEDC standard to allow a more direct comparison between cars.

Full insurance group listings have now been released for the A6 Avant, and the 50 TDI saloon sits in group 42 out of 50. The cheapest to insure is the 40 TDI, which sits in group 36 (or 38 for S Line models).

Audi's warranty covers the car for three years/60,000 miles, which is rather stingy next to the unlimited-mileage offerings of several rivals, including Mercedes. Paintwork is covered for three years, and there a 12-year corrosion warranty. Three years of UK roadside assistance is also included. For an extra cost, the warranty can be extended to four or five years.

There are two types of servicing available for the A6 Avant, which can be chosen at the time of purchase. Owners covering less than around 10,000 miles a year or making frequent short trips are recommended to go for annual servicing. Alternatively, the car's inbuilt sensors can determine when a service is required, and this is likely to provide motorway drivers slightly longer gaps between services. Audi typically offers fixed-price servicing deals to help spread the cost of maintenance, so it's worth asking about these at the dealership.