When it was on sale, the Chevrolet Captiva was a large SUV that went up against models like the Kia Sorento, Hyundai Santa Fe and Vauxhall Antara. With enough space for five or seven seats and the option of four-wheel drive, it was big, but the cost-cutting was clearly evident. The interior was of poor quality in places, its engines were dated and unrefined and there was lots of rock and roll in corners.

But a bargain price tag and high demand for large seven-seat SUVs meant the Captiva was still fairly popular. A tough exterior design and plentiful equipment – including leather seats on top models – made it easier to overlook its faults.

Unlike many of today’s sporty SUVs like the Mazda CX-5 and Land Rover Discovery Sport, the Captiva wasn’t great to drive; it was at its best cruising around town or on the motorway.

Not bad for a seven-seater SUV, but hardly economical

Chevrolet Captiva fuel economy and CO2 emissions aren't particularly impressive, but that's to be expected from a big, heavy-duty SUV like this. Go for the turbocharged diesel and it won't completely break the bank to run. It's available with 161 or 181bhp, and both versions are capable of returning 45mpg.

The lighter five-seat version with a manual gearbox emits 164g/km of CO2 for an annual road-tax bill of £185. Go for an automatic gearbox and the figures get substantially worse: fuel economy drops to 36.6mpg, while CO2 emissions increase to over 200g/km, for a £295 road-tax bill each year.

The Captiva is competent rather than great to drive

The Captiva isn't particularly good to drive. When the car was refreshed in 2011, Chevrolet stiffened the suspension, which improved the handling somewhat, but it still leans fairly heavily if you go through a corner quickly. The steering is also too light, which means it doesn't provide much feedback and feels inaccurate. Choosing the four-wheel-drive version improves things a little bit, as it has more grip, but rivals still perform better.

The Captiva's engines are powerful enough, though. The entry-level LS model comes with a 161bhp 2.2-litre VCDi diesel that gets it from 0-62mph in 10.4 seconds. The higher-spec LTZ model has a 182bhp version of the same engine, which brings the 0-62mph time down to 9.7 seconds – pretty fast for a car of this size.

The manual gearbox is clunky and awkward, but the automatic seriously hurts fuel economy, so whichever transmission you go for, you end up with a compromised car.

Engines are noisy and the Captiva is uncomfortable on rough roads

The most recent version of the Captiva (introduced in 2011) boasts a sportier exterior design, and Chevrolet tried to give the car sportier handling by making the suspension noticeably stiffer. The car is still comfortable on smooth roads, but sadly those are something of a rarity in the UK, so you'll feel every bump and pothole judder through your spine in the Captiva.

That problem is made even worse by the larger alloy wheels that come on higher-spec models. The other trouble with the Captiva is noise. The engines get pretty loud at higher speeds and the cabin isn't particularly well insulated, so this is a pretty draining car to drive on longer journeys. Some of the materials used in the interior feel a bit cheap, too.

Very spacious inside, although boot space is limited with all seven seats up

Space is the Captiva's key strength. It's huge inside, so there's no shortage of room for passengers in the front and back. The third-row seats in the seven-seater version will just about take two adults, but they're more suited to children – you certainly wouldn't want to be stuck back there for a long journey if you're anywhere close to six feet tall.

You can only access the third-row seats via the second row, but this is fairly easy to do, as levers make tumbling the seats forward a breeze. Boot space with five seats in place is a useful 465 litres, which expands to 1,565 litres if you fold the middle row down flat. But luggage capacity is negligible with seven seats up – there's barely enough space to squeeze a small weekly shop in.

The Chevrolet Captiva originally scored four stars in Euro NCAP crash tests, which was disappointing for an SUV, as people often buy them for their safety. But things got better when Chevrolet refreshed the car in 2011 and it scored the maximum five stars when it was retested. There's plenty of safety equipment, including an array of airbags, hill-start assist, electronic stability control, traction control, hill-descent control and ISOFIX child-seat mounting points.

The Captiva should prove to be reliable, too – there haven't been any major issues reported and all its components are tried and tested. But interior material quality is poor in places, so it might prove to be quite flimsy in the long run. The Chevrolet brand came 20th out of 32 marques in our Driver Power 2013 manufacturer rankings – a big improvement on 2012, when it didn't make the cut. Plus, the car comes with a three-year warranty.

Equipment is good, but resale values are poor

There are only two spec levels to choose from on the Captiva. Entry-level LS cars come with 17-inch alloys, air-conditioning, all-round electric windows, daytime running lights, an MP3-compatible CD stereo and Bluetooth phone connectivity as standard – which is pretty good.

Sadly, resale values for the Captiva are weak , so you'll take a big hit no matter which model you choose. These cars can lose as much as two-thirds of their value after just three years. They do come with a three-year warranty that includes servicing and roadside assistance, though.

Show me:
Chevrolet Captiva deals: Car deal of the week 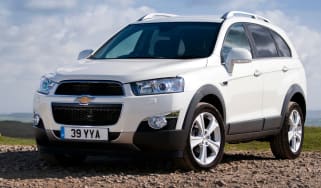 Get a massive £6,500 off the Chevrolet Captiva SUV - available from £20,495
Skip to ContentSkip to Footer