"Despite a £4,500 grant from the Government, the Citroen C-Zero is still very expensive to buy" 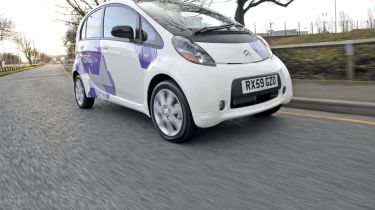 The result of an agreement between the two brands, the Citroen C-Zero is another version of Mitsubishi's i-Miev zero-emission electric car. Virtually indistinguishable from it's Japanese cousin, the Citroen C-Zero simply features new badges and a new name. Powered by the same battery powered 64bhp electric motor situated under the boot floor, the C-Zero has a range of 93 miles on a full charge and is best suited to life in the city. The tall narrow body is ideal for squeezing through tight gaps and despite the relatively short length, the C-Zero provides plenty of space for four adults. The Citroen C-Zero is exempt from road tax and the London Congestion Charge, some towns also provide free parking spaces for zero-emission vehicles.

Motoring at it's very cheapest

Worries of ever-increasing petrol costs become a distant memory to owners of the C-ZERO, you'll never have to visit a fuel filling station again. The average cost of a full charge is around £2, enough to travel 93 miles. The same trip in a petrol car would cost around five times that. The all electric C-Zero is free to to tax, London Congestion Charge exempt and in some areas is even free to park. Business users will also qualify for further tax reductions.

Purpose built as a city car and with a range of only 93 miles, the C-Zero is very well suited to short journeys. The fully automatic transmission suits stop/start traffic, simply slot the shift lever into 'Drive' and away you go- in virtual silence. As all of the power is available from standstill the C-Zero is nippy when pulling away and with a top speed of 80mph is not out of it's depth on open roads either.

One of the quietest cars on the road

There's loads of headroom in the C-Zero even if it is quite narrow and the complete lack of engine noise means that the cabin is a relaxing place to be, even for four people. Travelling at higher speeds reveals a high-pitched nosie from the electric motor and tyre noise is noticeable. Seats are comfortable but do feel cheap for a car at this price.

The limitations of day-to-day charging will annoy owners the most. The use of household extension cables is not allowed, so the five-metre long charging cable must be plugged directly into a mains socket, which limits where you can park your C-Zero to charge it. Full charges take 7 hours from normal mains sockets although special electric vehicle charging points allow owners to gain an 80 per cent charge in half an hour. Because of the high roof, there is a surprising amount of room inside the narrow C-Zero, but taller adults will feel cramped in the back if attempting the 93 mile range. The boot measures 166 litres which is quite small and is only suitable for small bags and limited amounts of shopping. The split, flat-folding rear seats reveal a much larger space, although the opening to the boot is quite small.

It's a tried a tested formula that works well

Mitsubishi has tested the i-MIEV's and C-Zero's electric drivetrain extensively in order to make sure the design is reliable and as a result, no reliability problems have surfaced. During crash testing by Euro NCAP, the all electric car scored four stars.

Expensive to buy even with additional Government grant

Despite the Government's electric car grant of £4,500, the C-Zero is still very expensive at over £25,000- double the price of a highly economical petrol-engined city car such as the Toyota iQ. Air conditioning is fitted as standard but sat-nav and a good quality stereo are cost options.

See how the Citroen C-Zero scores on our sister site DrivingElectric.