There are some worries over Citroen’s owner satisfaction, but the C3 Aircross should prove very safe

The Citroen C3 has now been on sale for a couple of years, and it featured in our 2020 Driver Power ownership survey. It didn't pick up a great score for reliability, but its engines have been tried and tested in other models, which should add reassurance. The car is also fitted with an impressive array of safety technology.

Owners love the car's styling but were less keen on its reliability. Overall, the C3 Aircross finished 66th out of the 75 models in the survey, but for reliability it placed towards the bottom of the rankings. Around 20% of owners reported faults in the first year, with electrical gremlins seemingly the most common problem. However, its PureTech petrol and BlueHDi diesel engines are widely used in a variety of Peugeot, Citroen and DS models, with no major issues reported. There are still a few areas of concern for the Citroen brand, too, but a rise of six places to 18th place out of 30 manufacturers in our 2020 Driver Power owner satisfaction survey suggests improvement. Around 17% of all the Citroen owners surveyed said they’d had at least one fault in the first year of ownership. 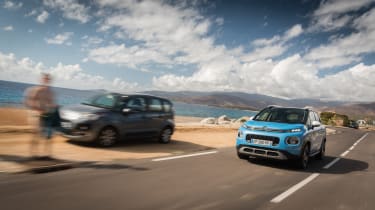 Along with the usual airbags to protect occupants in a collision, the C3 Aircross is fitted with driving aids to help prevent a crash. These include a colour head-up display that helps keep your eyes on the road more of the time, along with traffic-sign recognition. Lane-departure warning and blind-spot monitoring can help keep you out of harm’s way on the motorway and there’s also Active Safety Brake – Citroen’s name for autonomous emergency braking, designed to stop the car before a collision if it detects you're about to run into something. This is only standard on the top Flair trim level, though – it's optional at extra cost on other models.