The Citroen C3 Picasso is available with a choice of either a petrol or diesel engine. A five-speed manual gearbox is standard across the range and you can’t get an automatic, even as an option. Whichever model you choose, the Picasso has great road presence and turns heads with its unusual looks and distinctive daytime running lights.

A soft suspension set-up means the C3 Picasso is a comfortable car on the UK’s bumpy roads, although there’s some degree of body lean in corners as a result.

The C3 Picasso’s excellent visibility and power steering make driving in town a doddle. It fares less well out of town, where twisty roads expose its tendency to feel a bit floaty in corners at speed – as well as the previously mentioned body lean. 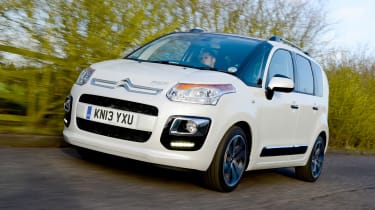 On the motorway, both engines feel powerful enough, but you’ll notice the effects of a strong crosswind as it hits the C3 Picasso’s tall sides – it’s not terrible, but it’s something rivals seem to cope with better.

We also found the driving experience was spoilt somewhat by the C3’s cramped footwell, which offers nowhere to rest your left foot when you’re not using the clutch.

The petrol engine is cheaper to buy than the diesel, but has to be worked harder to make decent progress on the motorway, particularly when the car is laden with passengers and luggage.

Despite this, it’s the better choice if you spend most of your time around town, where it’s nippy and economical enough to recommend.

Citroen says it’ll take 11.8 seconds to accelerate from 0-62mph, with a top speed of 116mph. The three-cylinder engine is quiet and smooth and more than happy to sit at a motorway cruise. Indeed, its performance belies its tiny 1.2-litre size.

Like the petrol engine, the C3 Picasso’s diesel is quiet and performs well. If you regularly drive long distances or carry a full load of passengers and luggage, it’s probably a better bet than the petrol.

It takes a lengthy 13.3 seconds to power the car from 0-62mph, which isn’t spectacular, and the way it delivers its power means it’s not as nippy as the petrol around town. Even so, it’s hard to argue with the promise of more than 70mpg fuel economy.