"The Ferrari GTC4 Lusso is incredible to drive, but also reasonably practical" 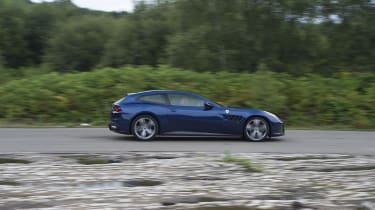 The Ferrari GTC4 Lusso is the most practical prancing horse in the Italian marque’s stable, one that combines truly awesome performance with spacious rear seats and a usable boot.

The car replaced the Ferrari FF and comes with the same 6.3-litre V12 engine under its bonnet, but now producing a whopping 681bhp, up from the 651bhp of its predecessor. The engine is a simply sublime piece of engineering, providing staggering speed, incredible responsiveness and a glorious soundtrack. Ferrari engineers have given the Lusso cornering ability to match the engine and the car is comfortable enough to become a refined cruiser when you want to use it for long journeys. 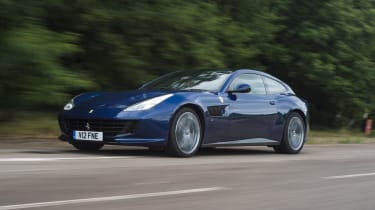 As well as the V12 version, Ferrari offers buyers the Lusso T, a 603bhp turbocharged V8 model that comes in around £50,000 cheaper than the almost £250,000 V12. Other than a different sound to the V12 model, the V8 doesn’t feel much different; it’s not noticeably slower on the road and offers the same interior and space as its more powerful sibling.

Thanks to its turbochargers, there’s an impressive surge of acceleration even at low revs, but Ferrari has still tuned the V8 to deliver its peak power at 7,500rpm, giving it a thrilling crescendo. It can’t match the character and excitement of the V12, though, and if buyers can afford a GTC4 at all, they can probably stretch to the bigger engine. Where the V8 really appeals is for its ability to go further on a tank of fuel, and in countries where cars are taxed based on engine size. 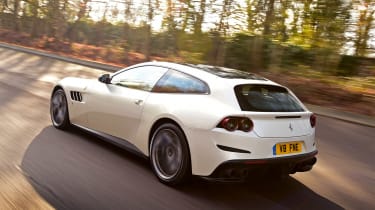 As well as performance and practicality, the GTC4 boasts a beautiful interior that has more of the technology and connectivity that was lacking in the FF. The GTC4’s versatility and breathtaking driving experience make it virtually unrivalled and the only real criticisms you can make of it are its high price and running costs.

You might expect a Ferrari with a 6.3-litre V12 engine to be heavy on fuel – and you’d be right

The GTC4 Lusso is a hugely expensive sports car with a 6.3-litre V12 petrol engine under its bonnet, so it’s very possible you’re reading about its efficiency for amusement rather than prudency.

Official fuel economy stands at 18.5mpg, but will regularly drop to a single digit in the real world and CO2 emissions of 350g/km will preclude a Christmas card from Greenpeace gliding through the letterbox come December. An interesting quirk of the new tax system introduced in April 2017 means that annual VED (road tax) is actually less than it would have been under the old structure for GTC4 Lusso owners, falling from a would-be £515 to £450 a year in years two to six of ownership. That’s after a high first-year VED payment of £2,000, although this is usually included in the on-the-road price. 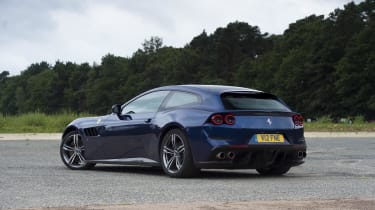 In economy terms, the Lusso T looks positively sensible next to the V12 version. It uses a much smaller, 3.9-litre turbocharged V8 engine that claims 24.8mpg. We managed to keep the mpg figure hovering around 20mpg at a steady cruise. Its CO2 emissions are much lower, at 265g/km but the difference between the Lusso T and the V12 version in this respect no longer affects the amount of tax you pay; both cost £450 a year.

There’s also the same eye-watering £2,000 first-year VED charge, although this is usually wrapped up in the on-the-road price. More reasonable fuel economy should at least mean longer schleps on the motorway without having to take a break – handy when the GTC4 Lusso is clearly designed to cross continents. In some important foreign markets for Ferrari, the smaller 3.9-litre V8 also means big savings for potential owners, where tax is based on engine size as well as emissions. 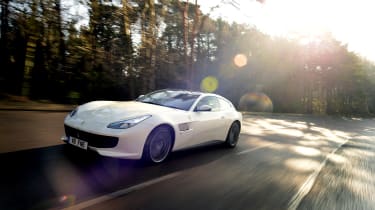 As you’d expect, the Lusso falls into insurance group 50 (the most expensive). Ferrari offers a four-year warranty that can be extended at extra cost, but a seven-year maintenance plan is included for free, so at least the cost of servicing is covered.

For further peace of mind, Ferrari offers a ‘New Power’ warranty to cover all major components, including the engine, gearbox, PTU, suspension and steering, from years 6-12 of the car’s life. After that, 'New Power15' is available, offering the same level of cover until the car is 15 years old.

As impressive and soulful as you’d hope it to be

Big petrol engines without turbochargers are an increasingly endangered species and the 681bhp 6.3-litre V12 in the Lusso demonstrates why a number of enthusiasts are likely to shed tears if they ever completely disappear. Simply put, it’s one of the best engines ever made, offering instant throttle response, staggering pulling power throughout the rev range and an incredible soundtrack that builds from a rumble, to a growl, to a glorious howl.

With launch control and the grip generated by the Lusso’s four-wheel-drive system, the car can get from 0-62mph in just 3.4 seconds and push on to a top speed of 208mph. That knocks three tenths off the Ferrari FF’s 0-62mph time of 3.7 seconds. 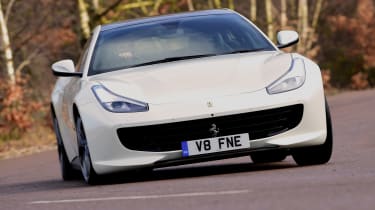 The GTC4 has four-wheel steering, which makes it very sharp and agile in corners. The setup gives the car’s steering a very fast feel at first, but once you get used to it, the sharp response seems natural. The weighting of the steering is virtually perfect and the feel is good too.

A dial on the steering wheel allows you to alter the character of the car depending on conditions and how you want to drive, with settings marked for ice and snow, wet, comfort and sport. There’s also a button that can be pressed when in sport mode called Bumpy Road, which slackens off the dampers in the suspension, meaning the car copes better with bumps and rough road surfaces - it's the setting of choice for UK roads. Leave it in this mode and the GTC4 Lusso is surprisingly comfortable for such a high-performance model, particularly on the motorway.

The brakes and gearbox are both impeccable accompaniments to the incredible engine, with the carbon ceramic discs delivering immense stopping power and the gearbox providing smooth, early shifts in full automatic mode and rapid, crisp changes when you choose to use the carbon fibre paddles behind the steering wheel. 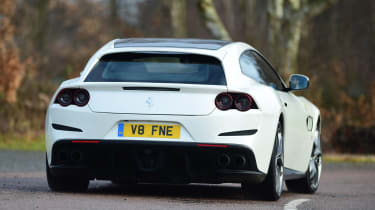 Although the Lusso T has a smaller 3.9-litre turbocharged V8 engine, it still produces 603bhp. The lighter engine and Ferrari’s decision to make the Lusso T rear rather than four-wheel drive means it’s 55kg lighter than the V12 GTC4 and can get from 0-62mph in 3.5 seconds, despite giving away 78bhp to the more expensive version of the car. While the V12 may be the ultimate engine for a car like this, the V8 is a brilliant one in its own right, with similarly instant throttle response, massive pulling power and aural thrills. It’s just a shame it lacks the ultimate character and excitement the V12 can provide, and for some purists it may not fit as well with the Ferrari ethos.

Out on the road, it’s hard to put one engine above the other in performance terms, but the V12 edges the V8 for refinement on a long motorway cruise. It’s the perfect match for the GTC4’s ‘grand touring’ character.

The GTC4 Lusso is comfortable, special and beautifully built inside

The Ferrari FF faced some criticism for its interior and the inside of the GTC4 Lusso is a marked improvement, giving the impression Ferrari has thought long and hard about how to add to the car’s appeal for long journeys. It’s a beautifully crafted environment.

The most obvious upgrade compared to the FF is the 10.25-inch widescreen infotainment system that you operate in the same way as you’d use a smartphone. The screen is big enough that you can split it in half to show sat nav and music, for example, and you can also link an iPhone to the screen via the optional Apple CarPlay system - though this last item isn't standard, which it really should be given the GTC4 Lusso's price. An optional extra is an eight-inch screen built into the dashboard on the passenger side, allowing them to scroll through information such as performance data, sat nav maps or media. 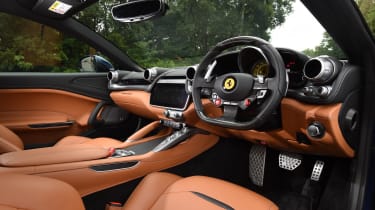 Most of the car’s internal surfaces are coated in plush leather and surfaces made from titanium and carbon-fibre help to give the interior a sense of occasion. A few areas out of immediate sight can feel mildly below par when you remind yourself of the car’s price tag, but on the whole the GTC4 is as luxurious on the inside as you’d expect of a car costing almost a quarter of a million pounds.

The GTC4 Lusso is Ferrari’s most practical model, meaning there’s genuinely enough space for adults in the two rear seats, plus a boot that can swallow a decent amount of luggage.

Compared to the FF, the GTC4 has 16mm more legroom for rear-seat passengers, which may not sound much, but does help improve legroom.

The 450 litres of space in the boot is relatively good for a GT, but the step inside it does make for an awkward shape. You can increase capacity to 800 litres by dropping the 40:20:40 split-folding rear seats flat and these also incorporate a ski hatch as standard, for those trips to the French Alps. 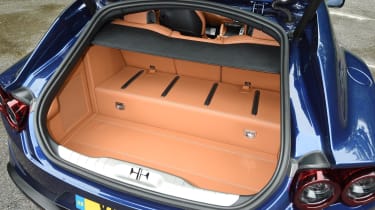 The Lusso is quite a bulky car, but it doesn’t feel it when you’re driving and visibility is relatively good. As you might expect, the driving position is excellent and even though the view out of the back of the car is poor, a reversing camera fitted as standard helps with parking.

Lots of smart safety systems, but no official rating

The latest Ferraris have a reputation for good reliability and with regular servicing the GTC4 shouldn’t develop any major problems. 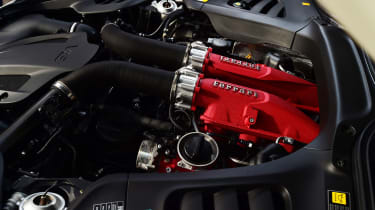 The GTC4 Lusso won’t be crash-tested by Euro NCAP because not enough are made, but there are plenty of clever electronic systems keeping the car stable, not to mention the four-wheel-drive system in the V12 version and the hugely powerful carbon-ceramic brakes fitted to both models.

The V12 version of the GTC4 Lusso costs just under £250,000 before you’ve added any options, while the V8-powered Lusso T is around £50,000 less. Any way you choose to look at it, whether buying the V12 or V8, the GTC4 is an incredibly expensive car. Prospective buyers may note that the extra £50,000 you have to spend to get the V12 engine doesn’t buy you a dramatic performance increase, but in truth that’s unlikely to sway those who have the desire and money for the ‘ultimate’ version of the car.

Ferrari offers GTC4 Lusso buyers a vast number of options, to such an extent that it’s very plausible there won’t be one example produced to the same specification as another. There are over 25 paint choices, five alloy wheel designs, nine brake caliper colours and a host of carbon-fibre upgrades for the bodywork. 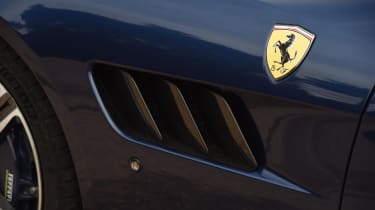 There’s a similar amount of choice for the interior, including three different seat choices and myriad options for the colour of the leather, seat stitching and carpets. Other options include an upgraded sound system, panoramic sunroof, sports exhaust, tinted rear windows and even a Ferrari luggage set. It does seem a touch miserly that Ferrari couldn’t include Apple CarPlay as standard given the car starts at £200,000, but it’s on the options list regardless.