It’s a shame that there are only two engines to choose from when buying a Civic Tourer, particularly when the petrol is relatively heavy on fuel. The more frugal diesel version of the Tourer actually feels faster than the petrol, despite a 0-62mph time of 10.3 seconds compared to the petrol’s 9.5 seconds. The 118bhp 1.6-litre i-DTEC diesel engine copes well with steep hills and heavy loads, plus it often seems more refined than the 142bhp 1.8-litre i-VTEC petrol due to its relaxed nature at higher speeds. The diesel does cost around £1,000 more to buy than the petrol, but we reckon it’s definitely worth the extra. 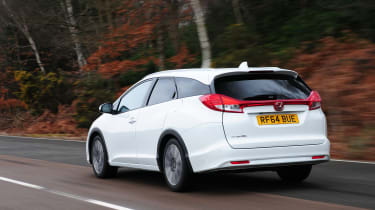 The diesel’s only drawback, other than its higher starting price, is that it tends to get bogged down at lower revs, meaning you may have to work it a bit harder to get the car moving quickly than you would with the petrol. Overall, though, the diesel is a much better bet, particularly when it’s hauling a car full of people or luggage around.

You get the impression that Honda has focused slightly more on comfort than handling with the latest Civic. Top-of-the-range models get an active suspension system that helps to iron out bumps in the road and also gives you a choice of driving modes – but even the sportiest setting is still pretty comfortable and never seems stiff. The steering is quite light, which makes driving around town easier, but it also means there isn’t much feedback – it’s a trait that doesn’t fill you with confidence if you want to drive the car quickly. The car’s stop/start system wasn’t very smooth on the car we drove either.