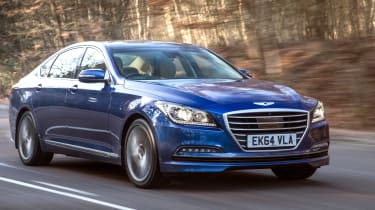 The Hyundai Genesis is likely to prove a reliable car – it feels well built and the engine is tried and tested. It should keep you safe, too, with lots of safety kit that all comes as standard.

If Hyundai’s recent record is anything to go by, then the Genesis should prove to be reliable in the long run. The brand placed a mid-table 18th in our Driver Power 2014 owner satisfaction survey, ahead of well known brands like Volkswagen and Nissan – but behind sister company Kia and German rival BMW. The 3.8-litre V6 petrol engine has been tried and tested in the American version of the Hyundai Genesis, so while it may not be the most fuel-efficient car on the road, it should be dependable – with all models benefitting from the brand’s five-year/unlimited-mileage warranty. Adding to this, the fit and finish inside the Genesis is very good throughout and should last the distance. 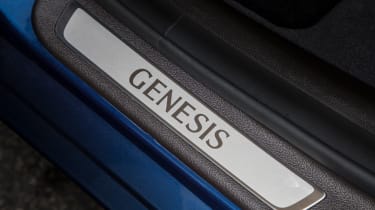 Safety equipment on the Genesis is extensive, including kit like automatic braking, adaptive cruise control, lane-departure warning, blind-spot monitoring, 360-degree parking cameras and a number of airbags as standard. There’s also a CO2 monitor, which keeps an eye on carbon-dioxide levels in the cabin and adjusts the climate control accordingly to help prevent you getting drowsy at the wheel. All this equipment comes as standard – there are no options to worry about.

We found most of the clever safety technology worked effectively, although the lane-keeping assistance function cuts in quite forcefully in an effort to keep the car between the lines. If any of these systems aren't required, most of them can be over-ridden using buttons by your right knee or by scrolling through the eight-inch touchscreen.

The Hyundai Genesis hasn’t been through the Euro NCAP crash tests – and probably won’t be, as it will sell in very small numbers in Europe. Its main rivals, the BMW 5 Series, Mercedes E-Class and Audi A6, all scored the full five stars when they were evaluated.