Comfort is prioritised over sportiness in the Mercedes E-Class estate

The Mercedes E-Class Estate has always focused on being easy-going and relaxing rather than stimulating. However, the latest model is far more rewarding to drive than its predecessors. This is important, since rivals like the BMW 5 Series are fun to drive without sacrificing practicality.

The BMW still has edge when it comes to fun, but the Mercedes isn’t too far behind. Body lean is more pronounced and there isn’t as much feel through the steering wheel as we’d like. However, the experience it offers still measures up well against the E-Class saloon – the extra bulk of the Estate hasn’t diminished the driving pleasure on offer one iota. 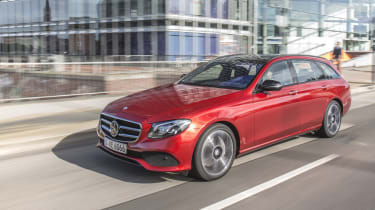 Enthusiastic drivers may be interested in the Mercedes-AMG E43 version of the estate, which is the quickest version in the range unless you go for the hugely powerful but expensive to run E63 model

We drove a car with Mercedes’ Driving Assistance Plus package. It’s a relatively expensive option but its adaptive cruise control definitely helped to make long journeys more relaxing, and we were pleased to have lane-keeping assist, which actively steers you back in lane on the motorway if you start to drift.

Thankfully we didn’t have to experience the Evasive Steering Assist system, which autonomously swerves the car to avoid a collision. Drive Pilot includes autonomous emergency braking and a feature that automatically lets the car crawl forward when a traffic jam starts to move, but not all of its features are available in the UK: we don’t get its automatic lane change function.

UK drivers are unlikely to notice a huge difference in the way 4MATIC four-wheel-drive models drive compared to their rear-wheel-drive stablemates. In very hard driving, it does feel even more securely planted on the road, but you’re most likely to notice the difference in adverse weather, where grip on slippery surfaces is increased. Drivers who want four-wheel drive for any off-road surface more challenging than wet grass will want the Mercedes E-Class All-Terrain.

The 192bhp 2.0-litre diesel E220d is likely to be the most popular choice among E-Class Estate buyers. Producing 192bhp, it’s not short of power and pulls strongly, although does become rather loud when worked hard. Its performance lives up to the amount of noise it makes, though – 0-62mph takes only 7.7 seconds – or 7.8 for 4MATIC models.

Power is managed by a nine-speed automatic gearbox, with imperceptible gearshifts and immediate response if you suddenly demand extra acceleration. It has different modes to enable the shifts to be tailored according to your mood, but we found it most enjoyable when left in Economy. This gives a relaxing drive with plenty of power at hand.

A less powerful 148bhp version of the 2.0-litre engine comes in the entry-level E200d model. It’s the slowest in the range, with 0-62mph taking 8.7 seconds, but it’s also the least expensive to buy.

The 255bhp 3.0-litre V6 diesel in the E350d powers the car from 0-62mph in six seconds flat and this engine provides a huge amount of pulling power for overtaking and towing.

The Mercedes-AMG E43 uses a twin-turbo 3.0-litre V6 engine that produces 396bhp. That’s enough power to get the car from 0-62mph in just 4.7 seconds, just a tenth slower than the saloon, and comfortably on to a limited top speed of 155mph.

The E43 gets very close to the 4.4 seconds of the S6 saloon and easily beats the 5.3 seconds achieved by the Jaguar XF S, which as a rear-wheel-drive car is let down by its lack of traction compared to the four-wheel drive Mercedes and Audi. The E43’s engine is extremely flexible and responsive, accelerating extremely briskly in any gear thanks to an optimised version of the nine-speed gearbox. This can be a little jerky if you perform your own gearchanges at high revs, though.

While the E43 is pitched as a performance car, and boasts huge amounts of grip and impressive straight-line speed, there’s no escaping the fact that it’s a big, heavy estate car. While the steering has good weight to it and the car feels relatively agile in corners, the E43 is best thought of as a very fast cruiser; the ride quality and power on offer means it’s capable of eating up the miles effortlessly. It is, however, worth bearing in mind that the E350d has plenty of power for this kind of driving, too, and it’ll prove considerably more economical.

It must be said that the Audi S6 sounds rather more exciting with its V8 growl, but the E43 is a very relaxing engine if you keep the revs low and let its lazy pulling power do all the work.

If you want your E-Class Estate to offer even more power than the E43 can provide, the even more powerful AMG E63 model and E63 S get 563bhp and 604bhp respectively for 0-62mph acceleration of around 3.5 seconds, but eye-watering running costs make them a niche prospect akin to supercar ownership.