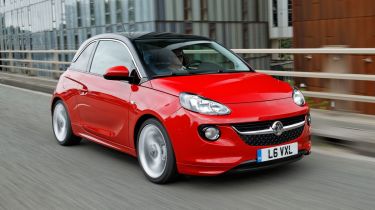 The Vauxhall Adam is now available with Siri Eyes Free integration – an all-new feature that allows you to talk to your car.

This means all drivers with a compatible iPhone, can direct Siri – iPhone’s voice commands program – to perform tasks in the car while keeping their hands on the wheel.

Vauxhall says that this is different to traditional voice activation systems, as drivers can speak to their car in a more conversational tone as well as receive verbal responses to voice commands.

As a safety feature, the iPhone screen doesn’t display any text on the phone’s screen as it normally would while using Siri – minimising driver distraction.

Siri integration is available for free in all new Adams equipped with IntelliLink, Vauxhall’s multimedia interface. Customers who already own an Adam equipped with the system can download Siri Eyes Free as a no-cost update, while IntelliLink can be fitted as an option on all Adams for only £275.

Features included in the Siri Eyes Free system include hands-free calling, playing music, and listening to and composing text messages. Vauxhall says that the Adam is the first city car to come available with this technology.

The Adam range is available in three specifications: Jam, Glam, and Slam. Jam is the base model, and equipment includes ABS brakes, air-conditioning, a CD player with USB and auxiliary sockets, Bluetooth connectivity, and steering-wheel-mounted controls, starting at £11,255.

The Glam, billed by Vauxhall as the more “stylish” of the specs, comes with a number of additional features including climate control. LED daytime running and rear lights, and chrome-effect exterior trim. The Glam starts at £12,650, a £1,395 premium over the Jam model.

The top-of-the-range Slam model adds a selection of sporty details and costs from £13,150. The additional equipment includes sports suspension, the same LED lights and body effects as the Glam, and 17-inch wheels.