Record-breaking version of the Renaultsport Megane hatchback has been announced

The fastest-ever Renault Megane has been announced. The limited-edition Megane Renaultsport 275 Trophy-R has been made lighter and features sports suspension and performance-orientated tyres.

The model is aimed at people who take their cars to the race track. Those credentials are boosted by the car taking the lap record for a front-wheel drive production car at Germany’s 14-mile Nurburgring race circuit. Its time of 7 minutes, 54.36 seconds is more than four seconds faster than the previous record holder, the SEAT Leon Cupra.

Renault says the Trophy-R is based on the recently-announced Megane Renaultsport Trophy which combines the firmer Cup sports chassis with 19-inch alloy wheels. The new model is 101kg lighter than before and uses an adjustable suspension setup, a sports exhaust and Michelin sport tyres.

The Megane Renaultsport Trophy-R can be distinguished from other models by red detailing and the lack of rear windscreen wiper – removed in the pursuit of saving weight.

Two race seats with red harnesses and additional suspension bracing feature inside. There are no rear seats, but four spare tyres can be carried in the boot.

The Trophy-R is priced at £36,430, a £7,500 premium over the standard Megane Renaultsport Trophy. It is available to order this week, with first customer deliveries expected in October. 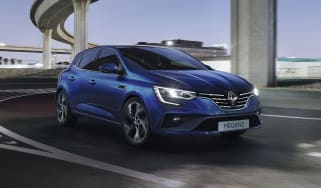