The new Audi Q7 will be lighter and cheaper to run than ever before. The all-new model will be available to order in the spring, with first deliveries expected in the summer.

The car will launch in the UK with a single engine: a 3.0-litre TDI developing 273bhp. It will be followed by a 215bhp version of the same engine, and a diesel plug-in hybrid by the end of next year.

Although new new car will be smaller than before, Audi claims interior space will increase both for passengers and luggage. The rear seats have slide forward and back up up to 110mm to increase legroom or boot space as desired. Two additional seats can be specified in the boot boosting passenger capacity to seven. These seats are certified as Group 3 child seats and can be raised and lowered electrically.

With the 273bhp engine, the Q7 will accelerate from 0-62mph in 6.3 seconds and will return 47.8mpg and emit 153g/km of CO2. This is aided by the Q7's shape, which has been designed to slip through the air as efficiently as possible.

Next year's lower-powered model wil feature louvres that open when needed for cooling functions, but will close in the pursuit of fuel economy.

The new SUV will feature new technology such as smartphone integration, adaptive cruise control with traffic jam assistant and voice-controlled functions for the telephone integration, audi and navigation. The Q7's main dials have been replaced by a large 12.3-inch screen that offers configurable displays for speed, navigation and trip computer functions.

Rear seat passengers can enjoy optional 10.1-inch tablet which serves as a screen and controller for the audio system, sat-nav and media functions, and makes it possible to browse the internet via a WiFi connection.

The Audi Q7 e-tron plug in hybrid will develop 368bhp and will become the first “premium” all-wheel drive large SUV. Audi claims 166mpg and CO2 emissions of less than 50g/km. Such a figure would make the Audi Q7 e-tron free to tax and exempt from the London Congestion Charge.

Audi will reveal pricing details closer to the car’s launch. The car will be revealed publically at the Detroit Motor Show in January. 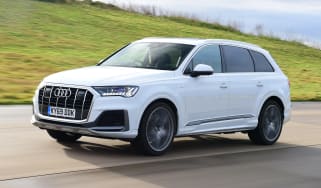