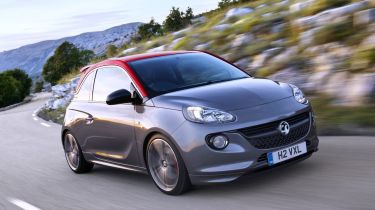 The new model, which sits at the top of the Adam range, boasts a 148bhp 1.4-litre turbocharged petrol engine developed specifically for the Adam. The Adam Grand Slam will cover 0-62mph in around 8.5 seconds and achieve a 124mph top speed.

That’s a significant increase over the 1.4-litre Adam on which the Grand Slam is based.

Vauxhall says the Grand Slam will emit 149g/km of CO2 and will return around 44mpg, which is broadly similar to its close rival, the Suzuki Swift Sport.

As well as this new engine, the Adam Grand Slam is fitted with powerful VXR brakes and a suspension setup developed specifically for this version.

The Grand Slam features a 18 inch alloy wheels, a new front spoiler and side skirts as well as a new rear bumper with cutouts for a larger exhaust. Ten paint colours will be offered and there’s an exclusive ‘Red ‘n’ Roll’ roof design.

Four different seat arrangements are offered, three of which don’t appear elsewhere in the Vauxhall Adam range. Recaro Performance seats are available in leather trim, and there’s and optional leather pack which features leather trim for the steering wheel, gear knob and handbrake.