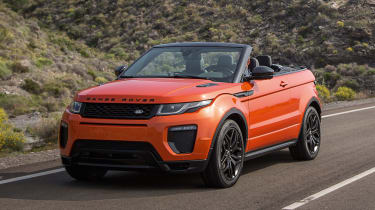 After years of previews, teases and concepts, Land Rover has taken the wraps off the final production version of the new Range Rover Evoque convertible – what it calls the world’s first luxury convertible SUV.

The Evoque cabriolet gets a cloth roof rather than an elaborate folding hardtop, but it still drops in just 18 seconds, allowing buyers to make the most of even brief sunny spells.

Speaking to our sister publication Auto Express at a preview event in Los Angeles, Land Rover design director Gerry McGovern said: "Evoque is a car that really resonates with people, which is why over 450,000 have been sold so far. It’s really changed the culture and attitude within our organisation, too, and this convertible is a natural progression – but it wasn’t easy to do."

The Convertible is slightly longer and wider than a standard Evoque – as well as being 277kg heavier, due to the usual strengthening required to maintain body rigidity without a fixed roof. 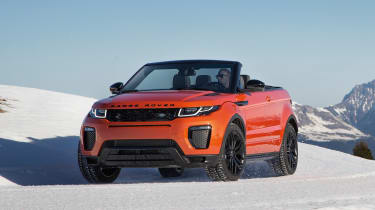 This means performance and fuel economy are both slightly less impressive than for the hardtop: 0-62mph comes up in 10.3 seconds rather than nine flat and claimed fuel economy is 49.6mpg – down from 57.6mpg. CO2 emissions have gone up from 129 to 149g/km, increasing owners’ annual road tax bill from £110 to £145.

It’s expected that most UK Evoque Convertible buyers will go for the 178bhp Ingenium diesel engine, but Land Rover will also offer the model with a 237bhp Si4 petrol. The Evoque cabrio will also only be offered in the two highest trim levels: HSE Dynamic and HSE Dynamic Lux.

None of the Evoque’s trademark off-road ability has been lost in the transition from hardtop to convertible, but the extra space required for the roof mechanism means it’s strictly a four-seater – there’s no room for a third person to squeeze in the back row.

The boot will hold 251 litres, but its opening looks quite narrow, so you may struggle to get large items of luggage in. 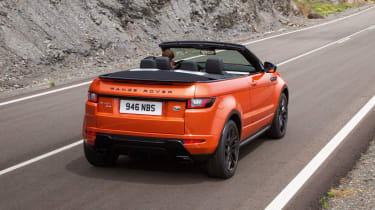 Several new pieces of in-car technology will debut in the Evoque convertible, including the latest InControl Touch Pro system with a 10.2-inch touchscreen and 3G internet connectivity.

As well as providing sat nav and controlling the car’s Meridian stereo, InControl has various apps that can work on smartphones, plus remote tracking and a Wi-Fi hotspot. There’s no Apple CarPlay or Android Auto for now, though.

More traditional luxury features such as leather seats are standard across the range. Outside, there are all-LED headlights, while safety kit in includes autonomous emergency braking to prevent low-speed crashes.

The Evoque Convertible will be priced from £47,500, which is over £5,000 more than the equivalent Coupe or five-door model. That’s a similar premium to what buyers of convertible BMWs pay over the hardtop coupe models. 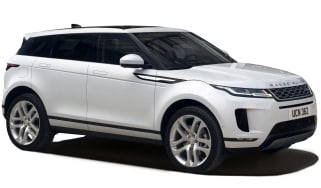