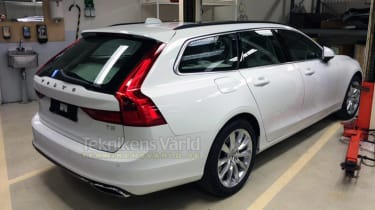 The first pictures of the new Volvo V90 estate have been leaked ahead of the car’s reveal to the public (expected in the spring). Like its saloon sibling – the S90 (which will be revealed in full at this month’s Detroit Motor Show) – the V90 has been spotted without any camouflage months before its intended launch date.

These spy shots – which were initially captured by Swedish publication Teknikens Värld and re-published by our sister title Auto Express – clearly show the new estate’s rear and how it’s been influenced by the elegant ‘Concept Estate’ shown at the 2014 Geneva Motor Show. The final production model will make its public debut at this year's Geneva Motor Show. 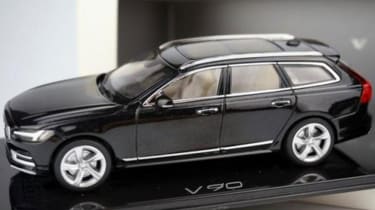 It’s based on the same platform as the superb Volvo XC90 SUV, so there are clear styling echoes in the V90 – with similar ‘L-shaped’ rear light clusters and the same chrome-trimmed window line and upturned shoulder line towards the rear. It also gets a steeply raked rear screen and prominent rear spoiler, both of which give it a much sleeker look than the V70 it replaces.

As expected, the front of the car is unchanged from the S90 saloon, featuring the same ‘Thor’s Hammer’ LED headlamp design. As well as this, it gets an identical oblong grille, with the famous Volvo ‘Ironmark’ badge set in the middle, held by a diagonal chrome trim piece. 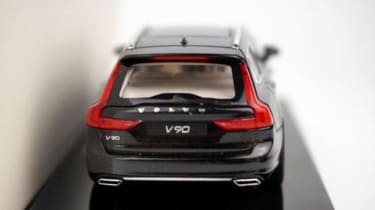 We’re told that the V90 will use the same range of 2.0-litre petrol and diesel four-cylinder engines as the XC90 and S90 SUV and saloon. Given the extra weight of the estate body, however, it’s unlikely that the cleanest diesel will drop below the magic 100g/km CO2 emissions mark. It should however, remain fairly low.

The version likely to be popular with high-end company-car users is likely to be the T8 plug-in hybrid. In the XC90, despite producing 394bhp, this engine returns 134mpg and emits just 49g/km of CO2. The lighter and more aerodynamically efficient V90 estate should prove to be even cleaner and cheaper to run. 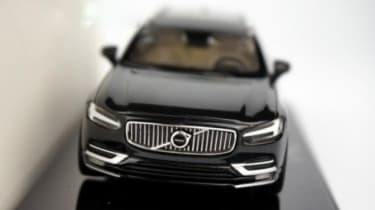 There’s no official word on a release date or prices for the V90 as yet, but we expect entry-level models to start at around £42,000, with the first cars arriving towards the end of 2016.