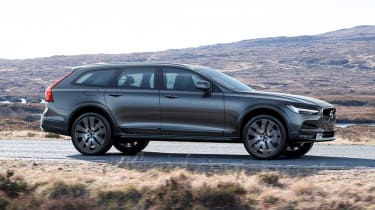 It's been designed to take on the likes of the Audi A6 Allroad and the forthcoming Mercedes E-Class Estate ‘All Terrain’. It’ll go on sale early in 2017 as a replacement for the ageing Volvo V70 XC.

The V90 Cross Country is the fourth and final member of the ‘90’ model series – following the XC90, S90 and V90 – and completes the firm’s revamped line-up at the top of its range. Next in line for similar treatment will be the ‘60’ and ’40 series of cars.

The Cross Country version of the V90 includes a few minor design tweaks compared to the standard model. There’s black plastic cladding around the underside of the car and a raised ride height to improve its off-road ability. There are also Cross Country logos dotted around the exterior. Otherwise, not much has changed; the car has the same ‘Thor’s Hammer’ LED daytime running lights, concave grille and distinctive rear light signature as the standard estate model. 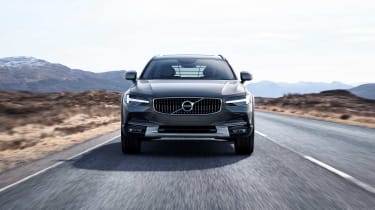 The interior of the car remains unchanged, with the same crisp, modern design, high-quality materials and huge nine-inch portrait Sensus infotainment system dominating the dash as in the standard V90. 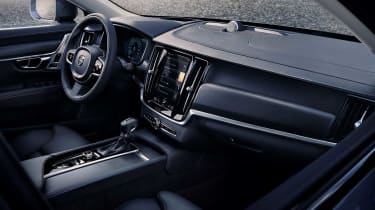 At launch, the V90 Cross Country will come with a choice of two 2.0-litre four-cylinder diesel engines. Called D4 and D5, these manage 187 and 233bhp respectively.

The D5 comes with ‘Power Pulse’ technology, which essentially uses compressed air to get the engine’s turbocharger spinning more quickly, reducing the delay between the driver pressing the throttle and the power arriving (otherwise known as ‘turbo lag’). 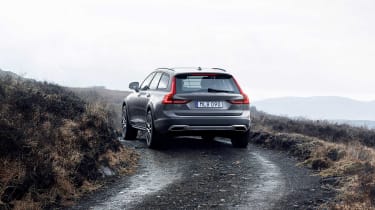 Acceleration and efficiency figures are virtually identical for the automatic, meaning both D4 models will cost £130 a year to tax (if bought before April next year, when road tax rules change).

The more powerful D5 version will do the 0-62mph sprint in 7.5 seconds, return 53mpg and emit 139g/km in CO2, just keeping it in the same tax band as the D4. Both the D4 and D5 will come with four-wheel drive as standard.

Volvo boss Håkan Samuelsson said: “Cross Country has become the true expression of a Volvo car in many people’s eyes. It was a winning concept from the start, perfect for the tough climate and road conditions that we experience in Sweden.” 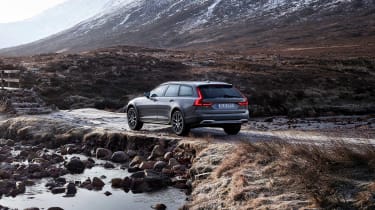 Volvo says the introduction of the Cross Country will “cement its leading role as the most capable and comfortable premium all-roader on offer and complete its 90 series line-up.”

Development boss Dr Peter Mertens said: “We were very careful from the very beginning to ensure that the Cross Country concept was not just an exercise in rugged styling. We placed high demands on real-world capability, and as we developed the segment, we added the comfort and convenience elements that Volvo drivers have come to expect.” 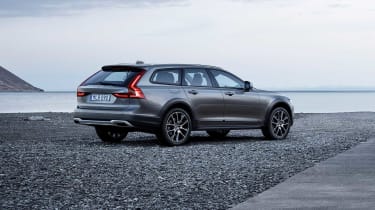 The new model’s name is part of Volvo’s desire to brand its rugged passenger cars and SUVs differently. While fully-fledged SUVs are badged as XC, the Cross Country name is given to hatchbacks and estates that have mild off-road ability.

Prices will be released closer to the car’s on-sale date, but we expect a premium of around £4,000 over the equivalent V90 estate. There’s just the one ‘Cross Country’ trim, but buyers wanting a sportier look for their V90 Cross Country will be able to swap the black plastic cladding for a body-coloured equivalent.