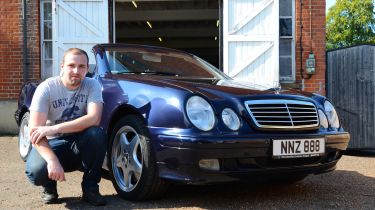 Breakdown cover is a popular safety net for many motorists. It provides peace of mind on the off-chance something goes wrong, as you know a trained technician will be on the way to fix your car.

But that wasn’t the case for Nicholas Seal from Farnborough, Hants. Nick got in touch with us after breakdown provider the RAC caused more than £1,200 worth of damage to his car through a "botch-job" repair – but then refused to pay to rectify it.

"I called the RAC after the brakes on my 2001 Mercedes CLK 430 went hard and my engine started to run rough," Nick told us. The RAC technician told Nick there was a loose vacuum line hanging down the back of the engine, and said he had a spare that would allow Nick to drive to the nearest Mercedes garage, Huxleys in Fleet, for repairs.

However, the replacement vacuum line didn’t immediately fit. Nick told us the RAC technician then took out a screwdriver and a hammer and forged a bigger hole for the pipe.

'The next day, Huxleys discovered there had been damage to the inlet manifold. I was told I’d need an entirely new manifold, at a cost of £1,223," explained Nick. "Another RAC technician came out, and was shocked by the damage that had been caused by his colleague." The technician agreed that the RAC would foot the bill – but when it came to carrying out the repairs, the RAC refused to pay.

"I was told there wasn’t enough evidence to prove the technician caused the damage," Nick said. We got in touch with the RAC, and pointed out that its own technicians agreed the roadside repair had damaged the car.

An RAC spokesman got back to us and said: "As our patrol’s temporary repair appears to have inadvertently caused damage to the manifold of Mr Seal’s vehicle, the RAC is covering the full cost of repair and providing a hire car while the work is carried out. We would like to apologise to Mr Seal for the inconvenience caused."

Nick was delighted with the outcome, and added: "Thank you for your help in resolving this."