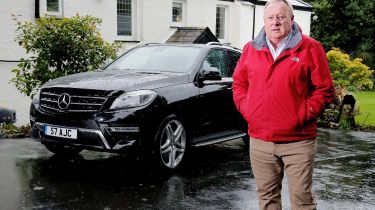 Wear and tear items like clutches, interior trim and tyres are regularly a source of heated debate between owners and manufacturers when repairs are needed. Often a verdict from a dealer or independent inspector can resolve the issue, but a manufacturer may still dig its heels in.

That’s what Allan Christopher from Kittle, Swansea, found after nearly two years of owning his Mercedes ML350. He bought the SUV from Mercedes-Benz of Bedford in September 2014, but earlier this year, Allan found the condition of the driver’s seat had deteriorated significantly.

The Artico leather had started to crack, and he said it now looked as if the car had done far more than the 20,000 miles on the clock. "The seat shouldn’t be in such bad condition. I take good care of the car," Allan said.

He contacted his local dealer – Mercedes-Benz of Swansea – and set up an inspection. "The dealer told me the wear was excessive and said that it would get in touch with Mercedes and set up a warranty claim on the £402 repairs," Allan told us.

Knowing that independent inspections can often help to convince manufacturers, Allan also had his car inspected by local specialist Automotive Leather Interiors Ltd, which confirmed that his M-Class’s hide trim was faulty and in need of repairs, which he hoped Mercedes would cover.

But Allan said: "Mercedes refused to help. It told me the damage was from wear and tear." We called the maker to ask why it wouldn’t repair the seats after inspections by both a Mercedes dealer and an independent engineer. Its spokeswoman said the dealer had advised the condition of the leather "is not due to a manufacturing fault", adding: "We consider this specific case to be general wear and tear, as shown by the most apparent wear being on the driver’s seat."

Allan disagreed with Mercedes and is now considering taking legal action over the worn seats, using his independent report as evidence. He said: "Mercedes has only seen the seat in photos: those who see it in person agree there is a fault."

Allan added: "My dealer agreed to cover half of the repair costs, but I’m committed to recovering the rest from Mercedes."