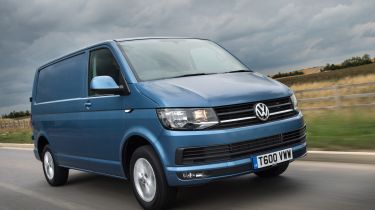 The most efficient version of the Transporter T6 is now available to order from Volkswagen Van Centres. The Volkswagen Transporter BlueMotion promises some of the best fuel economy in the panel van class.

The Transporter BlueMotion uses the same 2.0-litre TDI engine found elsewhere in the range. Through a number of BlueMotion tweaks, the 100bhp Euro 6-compliant engine is now capable of 51.4mpg – a 7% improvement – and CO2 emissions have dropped to 145g/km.

These improvements have been made possible through a range of exterior changes. These include spoilers that improve airflow around the wheels, lowered suspension and low friction tyres which require less effort to turn. Mechanical changes include modified gear ratios, cruise control and a top speed limited to 62mph.

These modifications are in addition to the stop-start and battery regeneration systems fitted across the Transporter T6 range.

The Transporter BlueMotion has a gross vehicle weight of 2.7 tonnes, and is capable of carrying a 839kg payload – a 121kg improvement over the standard short-wheelbase van with the same engine.