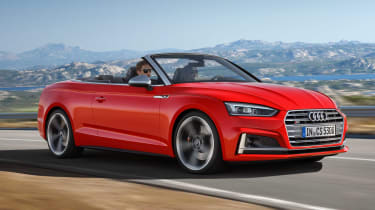 The new Audi A5 Cabriolet and the powerful S5 version are on sale now, with the cheapest A5 Cabriolet priced from £35,235. Roof aside, the convertibles are almost identical to their coupe counterparts, sharing the same trim levels, engines and fundamental mechanicals.

The key draw, clearly, is the A5’s folding fabric roof, which operates in just 15-18 seconds at speeds up to 31mph. While the BMW 4 Series Convertible features a folding metal hardtop, Audi has stuck with fabric for the A5 and S5 Cabriolet models, saving weight, complexity and cost. It should be noted, however, that the circa £5,000 premium you pay for a convertible rather than a coupe is the same for both Audi and BMW.

The A5 Cabriolet is available with four engines and three trim levels, with the S5 Cabriolet getting its own equipment list and a potent 349bhp 3.0-litre turbocharged petrol engine. A 187bhp 2.0-litre turbo-petrol in SE trim marks the start of the A5 Cabriolet range, and all models come with heated leather seats, all-round parking sensors and autonomous emergency braking. Upgrading from SE to Sport trim costs around £2,000, with the S line model around £1,600 extra on top of that.

The 187bhp petrol is the only engine available with a manual gearbox; a seven-speed dual-clutch automatic is fitted to all other A5 Cabriolets, while the S5 comes with a conventional eight-speed automatic. Audi’s quattro four-wheel drive system is standard with the most powerful petrol and diesel engines (as well as the S5), optional with the 2.0-litre diesel and not available with the 187bhp petrol engine. 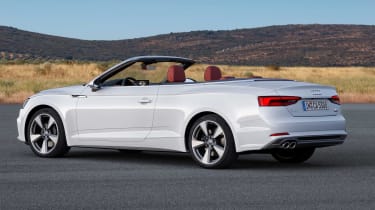 Apart from the obvious changes to the roof, the Cabriolets’ styling is very similar to that of their hard-top Coupe equivalents. The front grille, as well as the front and rear light clusters are carried over unchanged from the Coupe, while the crease in the bodywork that runs from the front to the rear light clusters is also present. Like the Coupe, this bends around the bulging rear wheelarches.

In order to accommodate the roof and its mechanism, the Cabriolet’s rear deck is longer than that of the Coupe, while the extra-insulated ‘acoustic’ roof folds down behind the rear seats in just 15 seconds and takes 18 seconds to rise into place again. It’s operated by a switch in the centre console and can be opened and closed at speeds of up to 31mph. 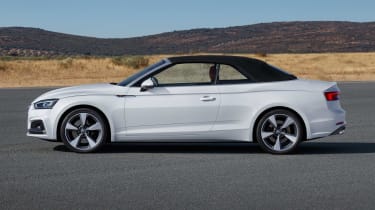 Very little, if anything, has changed inside compared to the Coupe. The layout remains unchanged, while the S5 gets additional items like sports seats, a sporty steering wheel and extra equipment.

Practicality has been reduced slightly, however. With the roof up, the Cabriolet has 380 litres of boot space compared to the Coupe’s 465 litres. Drop the roof and there’s even less space available. If you need to carry longer loads, however, you can drop the two rear seats that can be folded individually.

In terms of equipment, the Cabriolet is pretty much the same as the Coupe, with one major exception: all versions get front seatbelt microphones connected to the speakers, allowing easier communication between driver and passenger. The innovative, seemingly endlessly configurable, 12.3-inch Virtual Cockpit display is available as an option in place of traditional analogue instruments. 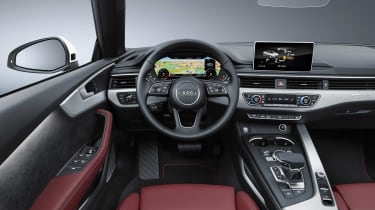 Audi’s ‘twin’ leather upholstery is standard on the entry-level SE model, and this comprises real leather on the centre of the seats, with synthetic leatherette applied to the head restraints and seat bolsters. 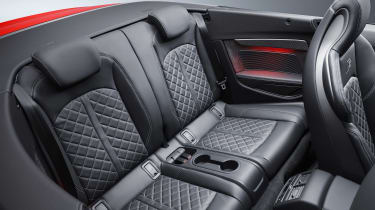 The high-performance S5 Cabriolet gets more sporty add-ons, including a subtle boot spoiler, side skirts and a jutting front splitter, allied to a deeper front valance housing larger air intakes. It also gets S5 badges at the front and rear, silver mirror caps, quad tailpipes and larger alloy wheels.

Like the A5 and S5 Coupes, the new A5 and S5 Cabriolet are available with a host of driver assistance and active safety systems. At the top of the list is adaptive cruise control with traffic-jam assistance that allows the car to essentially drive itself in heavy traffic at speeds of up to 40mph.

You can also specify a predictive efficiency assistant. This uses a combination of cameras, sensors, radar and GPS data to evaluate your surroundings and advise you on the most efficient way to drive. There’s also a collision avoidance system that uses those same features to calculate the ideal route to avoid a potential collision.

Other active safety systems include road-sign recognition, lane-keeping assistance and blind-spot monitoring. You can also have rear cross-traffic alert and an automatic parking system that’ll steer the car into a parking space for you while you control the pedals.

There’s a familiar range of petrol and diesel engines available, with two petrols and two diesels on offer. The 189bhp 2.0-litre turbocharged petrol engine takes 7.9 seconds to go from 0-62mph and returns 47.9mpg, while the 249bhp version of this engine reaches 62mph in 6.3 seconds and claims official economy of 44.8mpg.

You can also specify a 187bhp 2.0-litre four-cylinder diesel, which will return up to 62mpg. The A5 Cabriolet range is topped by the 215bhp 3.0-litre V6 diesel. Only available with quattro four-wheel drive, this will reach 62mph in 6.8 seconds and can return 57.6mpg. 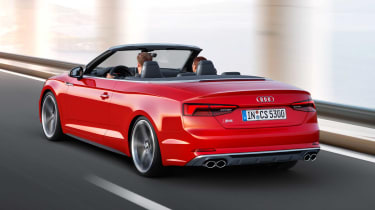 The high-performance S5 Cabriolet version is powered by a 3.0-litre turbocharged petrol V6 producing 349bhp, sending power to all four wheels through an eight-speed automatic gearbox. It’ll launch from 0-62mph in 5.1 seconds and is electronically limited to 155mph. It returns economy of around 37mpg.

Due to the new road tax system, an Audi A5 Cabriolets registered on or after 1 April will cost £140 a year to tax; models with a list price of over £40,000 (which is most of them) will be subject to a further £310 annual supplement though, which is applicable for the first five years of the car’s life.