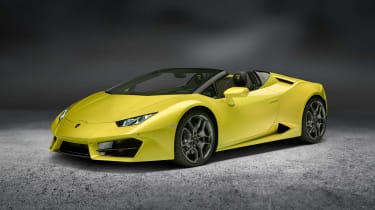 In addition to the recently launched rear-wheel-drive coupe, the Lamborghini Huracan Spyder has also gained a rear-wheel drive version, which was unveiled at the Los Angeles Motor Show.

Like the coupe, the rear-drive convertible Huracan Spyder loses out slightly in the power stakes compared to the four-wheel-drive Spyder, but Lamborghini says the rear-drive version is more about driver involvement than maximum outright performance. However, not many people will find it lacking in terms of the performance on offer.

It uses a slightly detuned version of the company’s 5.2-litre V10 engine, which still produces 572bhp (the four-wheel-drive version offers 602bhp). It sends that power to the rear wheels only through a seven-speed dual-clutch automatic gearbox. This means it’s good for a 0-62mph time of just 3.6 seconds and has a top speed of 198mph. In comparison, the four-wheel-drive Spyder manages 0-62mph in just 3.4 seconds and can just about break the 200mph barrier at the top end. 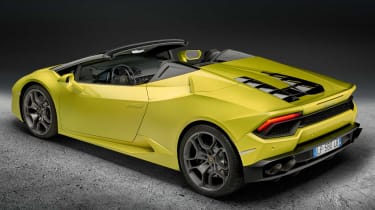 With no power going to the front wheels, the steering is uncorrupted by other forces, something many keen drivers prefer. This eliminates a phenomenon known as ‘torque steer’ where the steering wheel wriggles unpleasantly under hard acceleration. The new Spyder is also lighter than the four-wheel-drive model thanks to the absence of the four-wheel-drive hardware, which also improves its driving dynamics.

When it comes to design, there’s not much to differentiate the two-wheel-drive Huracan from its four-wheel-drive sibling. There have been some subtle changes made to the air intakes at the front, which now have a strip running across them, while there are also some minor changes made to the back of the car. Buyers will also find a new design of 19-inch alloy wheel at each corner. 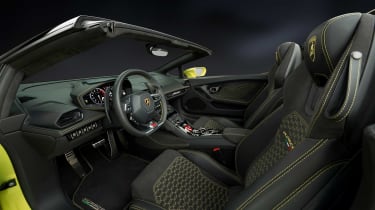 The Spyder’s power-operated fabric roof stows away behind the passenger compartment and can be opened or closed in just 17 seconds at speeds of up to 31mph. The interior of the rear-drive car is unchanged compared to that of the four-wheel-drive model. 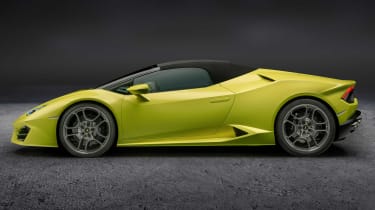 Orders for the rear-wheel-drive Lamborghini Huracan Spyder open in January 2017, with prices likely to start at around £190,000.