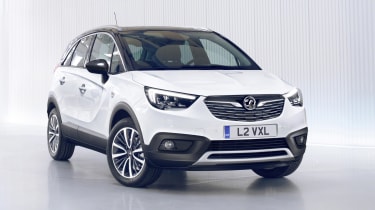 The new Vauxhall Crossland X is proof carmakers like to give consumers what they want, and give them plenty of it. The larger Vauxhall Mokka X SUV has been a huge success, so it’s no surprise a smaller sibling is joining Vauxhall’s burgeoning SUV stable, replacing the Meriva MPV in the process. 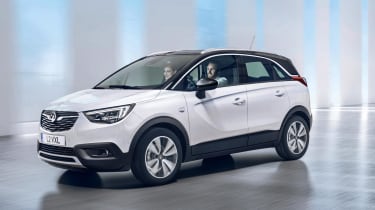 Despite the chunky looks, Vauxhall is offering the Crossland X with front-wheel drive only. That’s not unusual in this class: both the Renault Captur and Peugeot 2008 eschew a 4x4 setup, which buyers rarely specify when ordering "urban crossovers" – how Vauxhall is billing the Crossland X.

The Crossland X’s height makes it an SUV, while the high bonnet, prominent headlights and “floating” roof (which will be available in a range of colours) emphasising the car’s height, as do the rear lights. Look at the Crossland X side-on, however and it’s fair to say it has a slight air of the people carrier about it – particularly if you imagine the black sections are the same colour as the rest of the car.

No firm details have been released for the Crossland X’s engine range, but Vauxhall says an “extensive petrol/diesel engine portfolio” will be offered. The turbocharged 1.0 and 1.4-litre petrol engines found in the Astra may well feature, while Vauxhall’s ‘whisper’ 1.6-litre diesel is reasonably likely, too. 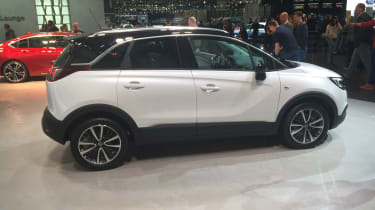 An 80bhp 1.2-litre petrol engine marks the start of the Crossland X range, but a modern turbo-petrol three-cylinder engine is up next, which can be ordered with 108 or 128bhp. Those after a diesel get a 1.6-litre engine, available with 98 or 1128bhp. 0-62mph takes as long as 14 seconds with the cheapest petrol engine, or as little as 9.1 seconds if you choose the 128bhp 1.2-litre petrol. Economy is pegged at the mid-50s for the petrol engines, and as much as 78.5mpg if you choose the 98bhp 1.6-litre diesel.

The Vauxhall Crossland X looks like an Astra inside. That’s a good thing, as the Astra has rightly won praise for its strong interior quality and sound ergonomic design. Standard equipment appears strong: all Crossland Xs will come with an infotainment touchscreen, complete with Apple CarPlay and Android Auto.

Another impressive feature is Vauxhall’s OnStar system, which will also be fitted to all Crossland Xs. This contacts the emergency services for you in the event of an incident, puts you in touch with a call centre should you have any queries and even provides a wi-fi hotspot for up to seven devices - although a monthly subscription is required for this once the free trial is up.

All cars come with the latest smartphone connectivity systems, cruise control, climate control, alloy wheels, automatic wipers, a leather steering wheel and split-folding rear seats. Safety kit is impressive too, with a front camera system being fitted to all cars, allowing for the traffic sign recognition and cruise control systems to work in conjunction with each other. 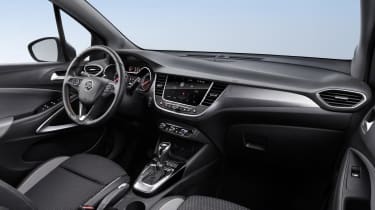 Thanks to an upright seating position, passenger space looks to be reasonable, while boot space is competitive and the 410-litre boot can be increased to 520 litres when the rear seats are slid forward.