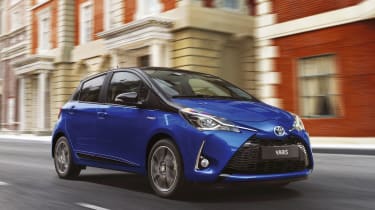 The 2017 Toyota Yaris has gone on sale with a starting price of £12,495, representing a £500 saving on the equivalent outgoing version. This will get you a Yaris 1.0-litre Active, but you’ll need at least £15,995 for the popular Yaris Hybrid model, which is now £200 cheaper than before.

Unveiled at the Geneva Motor Show earlier in the month, the new Yaris has had a claimed £78 million spent on mid-life changes, which include a new 1.5-litre petrol engine with 110bhp. This replaces the current 1.33-litre petrol, cutting the 0-62mph time to 11 seconds and returning up to 56.5mpg.

Toyota’s Safety Sense suite of crash-avoidance technology will be fitted as standard on every Yaris, with features including autonomous emergency braking and lane-departure warning. Not only should these help to reduce collisions, Toyota says they have also resulted in lower insurance groups for the new model.

Toyota is keen to appeal to a youthful market, so the revised Yaris echoes some of the C-HR crossover’s adventurous styling, with a more aggressive stance than its predecessor. Compared to the outgoing Yaris, the front and rear bumpers are more smoothly integrated, reflecting the shape of the of the new headlamps and emphasising the central Toyota emblem. The distinctive ‘catamaran’ shape below the headlamps is retained.

Viewed side-on, the Yaris now looks more dynamic, thanks to new mouldings at the door bases. These reflect a waist-height character line that draws the eye towards the rear lights. These, too, are all-new, and split across a refreshed tailgate. Bi-tone models will feature LED rear lights that display a unique lighting signature, while the lower bumper has been restyled to echo the front of the car.

Inside, Icon models and up feature a new instrument cluster with a 4.2-inch colour display at its centre; this can be configured to display your choice of information. A new steering wheel with contrasting trim highlights on certain models adds to a sporty environment, while the switchgear has been tidied up and there are now ‘propeller’ style air vents. 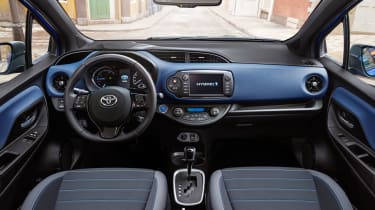 The Yaris’ previous 1.33-litre petrol has been replaced by an all-new, larger 1.5-litre engine, increasing power by 10% to 110bhp. This doesn’t come at the cost of economy, though – Toyota promises figures of 56.5mpg and 109g/km of CO2, a reduction in fuel consumption of up to 12%. The car’s 0-62mph time drops to 11 seconds and overtaking should be easier, too, thanks to greater power at middling engine speeds. A smaller 1.0-litre petrol engine remains available.

The Toyota Yaris Hybrid also continues to be unique in the supermini class and Toyota says it has been made quieter, especially under acceleration, and has a smoother ride. Changes have been made to the physical structure of the car to reduce vibrations and noise in the passenger compartment, while the electric power steering has been modified for greater accuracy. Toyota claims best-in-class CO2 emissions for the hybrid. 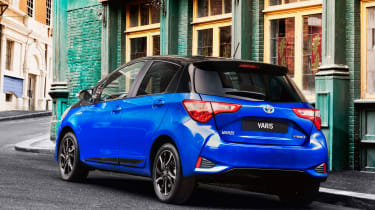 Trim levels start with Active, which is available with either a 1.0-litre or 1.5-litre hybrid engine. Toyota Safety Sense is fitted as standard, meaning autonomous emergency braking, lane-departure warning and auto-dipping headlights are all included, along with automatic wipers and Bluetooth. The hybrid version also gets automatic air-conditioning and projector headlights.

Icon includes 15-inch alloy wheels, cruise control and a 4.2-inch driver display, along with the Toyota Touch 2 infotainment system, a reversing camera and technology that can read road signs. If you spend a lot of time in your car, the Icon Tech grade adds front parking sensors to increase safety, while Toyota Touch 2 is upgraded with sat nav and an internet connection.

There are the also Design, Bi-tone and Excel version if you want your Yaris to stand out, with features including a honeycomb grille, LED daytime running lights, new wheels, part-leather seats and colour-coordinated trim depending on which you go for.