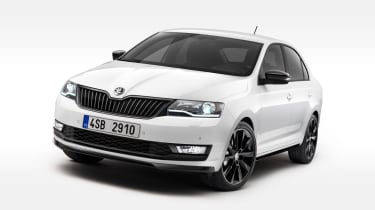 The Skoda Rapid hatchback and its smaller Spaceback sibling have received a mid-life facelift, refreshing their looks and bringing their equipment levels up to the level of rivals.

The design changes are subtle, but at the front new foglights feature and are connected by a thin chrome strip. LED daytime running lights are now standard, with full LED headlights offered as an option. The rear of the car, meanwhile, features black tinted lights, while fresh alloy wheel designs are also available.

Read our review of the new Skoda Rapid Spaceback here

Inside, new door inserts, air vents and air-conditioning controls have been fitted. A wi-fi hotspot is offered, as is Skoda’s Care Connect package. The latter will contact the emergency services for you automatically in the even of an accident, and can also transmit data to Skoda about the car’s maintenance requirements. Rear seat passengers get a pair of USB sockets for charging mobile phones and other devices. 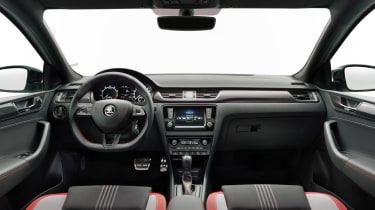 Under the bonnet, Skoda’s 1.0-litre three-cylinder turbocharged petrol engine is now available, and is offered in two power outputs. Choosing the 94bhp version will see 0-62mph take 11 seconds, with the 109bhp version doing the same in 9.8 seconds. Economy stands at 64.2 and 62.8mpg respectively.

The Skoda Rapid is a practical, affordable and sensible car, but its position in the market has always been slightly unclear. It’s best thought of as a halfway-house between the larger Skoda Octavia and the smaller Fabia, cars that compete with the Ford Focus and Ford Fiesta. The Rapid Spaceback, meanwhile, is cheaper than the standard Rapid, though despite the name, comes with a smaller boot and a sleeker-looking rear end. The changes made to the standard hatchback have also been made to the smaller Spaceback, which also gets a larger rear window. 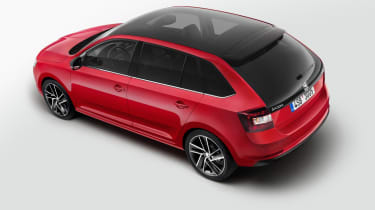 Skoda will officially unveil the updated Rapid and Rapid Spaceback at the Geneva Motor Show in March, and the new cars should arrive in dealerships later in the year.