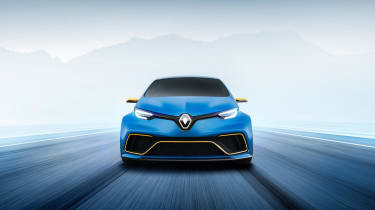 Renault has revealed a performance version of its electric ZOE at the Geneva Motor Show. The ZOE e-sport concept proves the French carmaker sees no reason why a battery-powered car can’t be seriously swift, too.

By fitting the ZOE e-sport with two electric motors, reducing weight by extensive use of carbon-fire and kevlar and engineering a four-wheel-drive setup, Renault has given this electric concept with serious performance credentials. 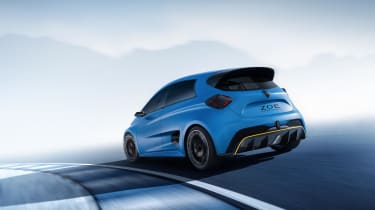 Inside, the two Recaro bucket seats have been designed to offer maximum grip during high-speed cornering, while the racing harnesses and rectangular steering wheel draw inspiration from Renault’s experience in the electric Formula E racing series.

The standard ZOE’s rear seats have been removed to save weight and allow for more electro-mechanical systems to be fitted, while under the metal Renault has fitted the e-sport with a custom tubular steel chassis and adjustable suspension. The e-sport concept’s 1,400kg mass means it’s no lightweight, but almost a third of that comes from the car’s batteries. 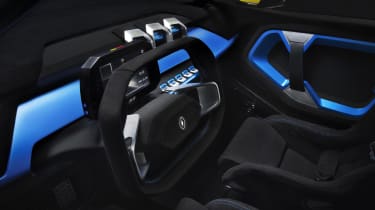 The ZOE e-sport concept has four different modes, allowing the driver to prioritise performance, electric range or a combination of the two; they also allow the ZOE e-sport to deliver most of its power to the front, rear, or all four wheels.

With the sportiest setting selected, the e-sport will go from 0-62mph in just 3.2 seconds and reach its 130mph top speed in under 10 seconds. A Formula E-inspired water and air-cooling system keeps the car’s batteries at the optimum temperature. 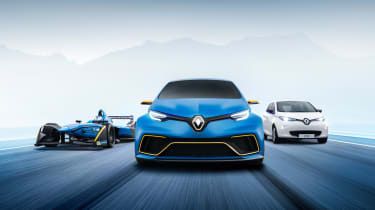 The ZOE e-sport concept is unlikely to make it into production, but it sends a clear signal that Renault is not averse to the idea of a performance version of its standard ZOE. Tesla was one of the first carmakers to prove that serious performance and electric power could be combined with impressive effect and it looks like Renault has come to a similar conclusion.