Electric concept car does without pedals and leans during cornering 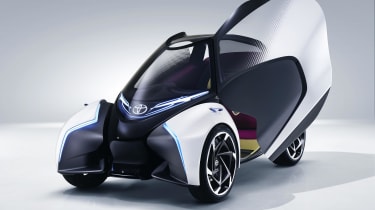 There are two kinds of concept car. One looks to the near future and generally exists to gauge public and press reaction to a forthcoming production vehicle; the second looks further ahead, indicating where a manufacturer perceives the future of motoring and transport to lie.

The Toyota i-TRIL falls into the second of those groups; it’s far too radical to be close to a “production-intent” model. Nonetheless, some of the ideas and features it showcases may make it into future production cars – although others may not.

The i-TRIL is an electric car designed for “parents who live in small or medium-sized towns”. Radical looks aside, it has a few noteworthy features.

One of these is Toyota’s Active Lean technology, which is intended to add a sense of fun when driving at lower urban speeds. During cornering, the i-TRIL’s body and front tyres lean by up to 10 degrees, while the rear wheels stay perpendicular to the road.

That theatrical movement will take place without any driver involvement, as the i-TRIL is (theoretically) capable of driving itself. To avoid feeling too much like a roller coaster, when in autonomous mode the right or left-hand side of the i-TRIL’s dashboard lights up to alert its occupants to an impending turn. 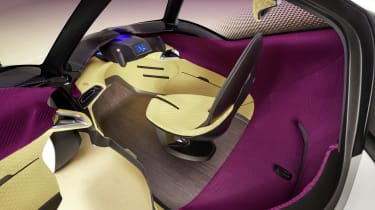 Should its owner want to take over driving, they’ll be able to – although they’ll have to adjust their mindset slightly, as the i-TRIL features no pedals. Instead, it’s operated by “control nodes” that work “like computer mice or games controllers”.

Other innovations include “butterfly” doors, an interior that’s been specifically designed to avoid feeling like a car and a one-plus-two seating arrangement, which places the driver front and centre, and accommodates two passengers on a bench-like seat.

In fact, the only conventional items fitted to the i-TRIL are its alloy wheels that, in keeping with modern tastes, are huge.