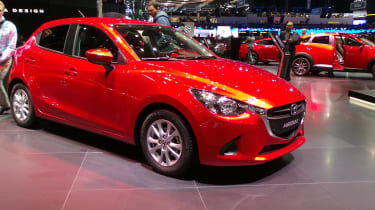 The Mazda2 supermini has received a light facelift for 2017, with subtle but welcome improvements coming to this Ford Fiesta rival’s exterior, interior and mechanical underpinnings.

Mazda has honed, rather than redesigned, the 2’s body. The front radiator grille gets a new grey finish and the long, thin radio aerial gets usurped by a smaller ‘shark-fin’, while the door mirrors get a power-folding option. Mazda is also introducing some new alloy-wheel finishes, while fresh red, grey and blue paint colours will be offered.

Inside, Mazda is introducing a new leather trim option, while fresh patterns are being rolled out for cars with fabric upholstery. The steering wheel gets redesigned for improved grip, while the optional head-up display boasts a colour – rather than monochrome – screen. 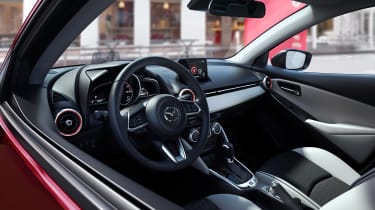 The 2 also gets some invisible improvements for 2017 – although these should be welcome nonetheless: extra sound-deadening has been engineered throughout the car, while 2s with a petrol engine come with the same sound-insulating windscreen fitted to diesel cars. Those sitting in the rear are likely to have toastier feet, too, thanks to the addition of extra heater ducts below the front seats.

Mazda’s supermini has also come in for some handling improvements. New suspension components should increase smoothness and comfort, while the company has installed its ‘G-Vectoring Control’ system. This alters the amount of torque (turning force) being sent to the front wheels if it detects steering inputs are being made when the car is accelerating. It’s said to improve grip and control, as well as driver involvement.

There are no changes to the Mazda 2’s engine range, so buyers can still choose from a 1.5-litre petrol available with three power outputs, or a 1.5-litre 89bhp diesel.