The '18' number plates banned by the DVLA 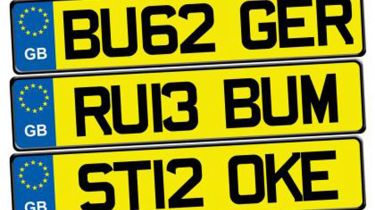 It's not unusual to see a little 'creativity' when choosing a car registration and the arrival of '18-plate' cars has opened up new possibilities for number plate mischief. But, as ever, the DVLA has been careful to block some of the more contentious combinations from appearing on the road.

There are certain numbers that closely resemble letters in the alphabet; these can lead to registration plates forming words that may be hilarious to some, but run the risk of offending others. Just as BA57ARD was blocked in 2007 and BU66ERS was prohibited in 2016, BO18CKS joins the banned list for 2018.

Once a potentially offensive number plate has been blocked, that ban will never be lifted. The decision as to what should and shouldn't be allowed is made by the Driver and Vehicle Licensing Authority (DVLA) in a meeting convened twice a year, ahead of each bi-annual plate change. Potential slurs against race, religion or political leanings are banned, and if an offensive plate does slip through the net, the DVLA has the power to force its removal and replacement with a more neutral registration.

The DVLA doesn't publish a complete list of banned plates, but it has announced some of those declared indecent for 2018. You need not fear meeting TA18BAN or suffer BU18SHT on the road, and no car will be defaced by PU18BES. BL18JOB is denied, too.

A DVLA spokeswoman commented: “There’s nothing scientific about it, it’s all done by taste, and if some slip through and we get a complaint, we take the feedback on board.” Our sister title, Auto Express, had a go at seeing which plates could have made it past the DVLA panel, and found several which had made it through – including ‘TO62 POT’, ‘LO62 ERS’ and ‘AR62 END’.

Number plates don’t have to be rude to be banned; anything potentially racist, offensive to a religion or crime-related could be outlawed. ‘JE55 US’, ‘15 LAM’, ‘OS55 AMA’ and ‘AD13 CTS’ fall into these categories, along with any plate which could have political connotations like ‘EU16 OUT’, ‘EU16 GON’ and anything containing ‘BNP’. 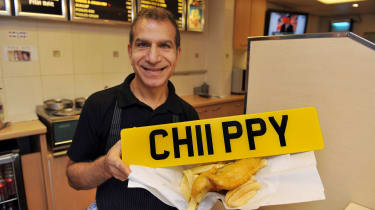 Plates can be banned regardless of whether they’re standard or personalised, but there’s likely to be good news for thousands of people who may now be able to find their ideal plate. When the ‘16’ plate arrived it included great combinations like ‘AL16 SON’ and ‘KN16 GHT’.

Here are more number plates which have been banned by the DVLA in recent years: