Sat navs, texting and chatty passengers are the most dangerous distractions while driving, a study shows 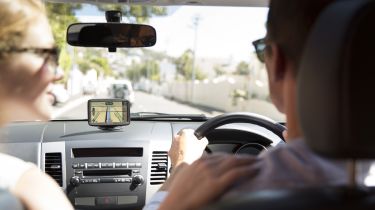 An experiment conducted by Carbuyer’s sister title Auto Express and road safety charity IAM RoadSmart has found that programming your sat nav is the deadliest attention-grabber behind the wheel.

Auto Express consumer editor Joe Finnerty and British Formula 3 racing driver Jamie Chadwick were tested in a state-of-the-art driving simulator to see how the most common distractions affected their concentration.

Both had to complete timed laps and brake at a specific point with and without the distractions, and the results were shocking.

Using a sat nav or similar device caused a significant speed reduction in the timed laps, and even racing driver Jamie missed her braking point completely.

IAM RoadSmart’s Tim Shallcross, who was monitoring the tests, said: “The moral? Those warning screens about not entering details on the move are there for a reason – don’t ignore them.”

Sending a text message was the second most dangerous activity, and other distractions looked at included eating, drinking and talking to a passenger.

Shallcross added that someone using a mobile phone while driving would be “a menace to other road users, [as] the car was more or less out of control.”

Even talking to a passenger was found to hinder reaction time in the braking test, showing that any distraction reduces the driver’s attention on the road ahead. In an emergency situation, that could well be the difference between injury or death and avoiding a collision entirely.

Steve Fowler, Auto Express editor, said: “These results highlight just how important it is that drivers give their full attention to the road ahead.

“We’ve seen the staggering numbers of people who are still using phones at the wheel, and these tests show how dangerous they can be – whether it’s texting, calling or programming the sat nav.

“More work needs to be done to target those who still think it’s acceptable to use a phone while driving,” he added.