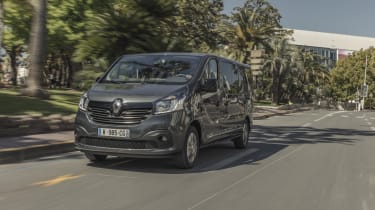 The new Renault Trafic SpaceClass nine-seater MPV is now on sale, with prices starting at £32,500 and deliveries beginning in January 2018. The rival to the Citroen SpaceTourer and Mercedes V-Class is intended as a “high-end shuttle” and shares its underpinnings with another nine-seater – the Vauxhall Vivaro Combi.

Renault is being fairly open about the SpaceClass’ intended market, highlighting its appeal to professional buyers who are likely to use it as a luxurious taxi or an airport and hotel shuttle bus. But the company points out “families looking for generous cabin volume” are also likely to find that the SpaceClass makes sense, while the optional leather seats and seven-inch infotainment system should be welcome creature comforts for private buyers and higher-end hotels.

The SpaceClass promises excellent versatility thanks to the modular design of the seats and their rails, which allow for 50 claimed configurations. Customers can organise the SpaceClass as a small minibus, while the removable central table turns it into what amounts to a mobile office or boardroom. 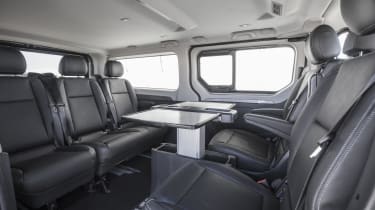 Three trim levels are available: Standard, Adventurer and Prestige. These can be specified in short and long-wheelbase versions, with a choice of 123 or 143bhp 1.6-litre diesel engines. The most efficient of these (the 123bhp dCi 125 model) returns 48.7mpg and emits 155g/km of CO2.

SpaceClass passengers will be treated to LED reading lights, 220-volt sockets and USB ports, as well as tinted rear windows and air-conditioning. Options include 17-inch alloy wheels, gloss-black exterior trim details and Renault’s R-Link infotainment system. Expect excellent visibility, comfortable seats and ample luggage space as standard, even with nine people on board. Adventurer models feature two swivelling captain’s chairs in the middle row, while the rearmost seats can be folded out into a bed.

Renault previously launched the SpaceClass at the Cannes Film Festival, where it served as a VIP shuttle bus for film stars, directors and producers from around the world.