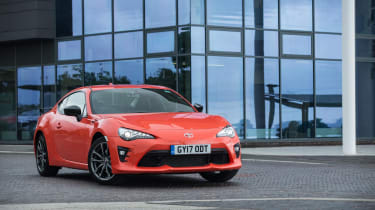 The latest in a range of special-edition Toyota GT86 sports coupes has been announced. Toyota says the Club Series represents a “stamp of quality for limited-edition versions of the GT86”.

The new Blue Edition follows the GT86 Club Series Orange Edition, and is barely any less distinctive, despite its more subdued colour. Where the Orange Edition comes exclusively in Solar Orange paint – which Toyota says has an “extra depth of tone” thanks to being applied in three layers – the Blue Edition is appropriately finished in Electric Blue. 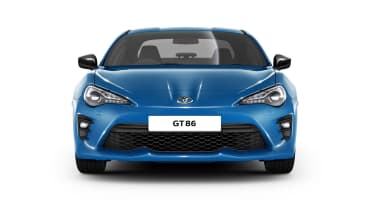 Complementing that striking paint job is a set of 17-inch alloy wheels, finished in black, which also highlights the rear diffuser and spoiler, front grille, door mirrors and foglight surrounds. You can also add an optional Performance Pack, with upgraded suspension and powerful brake calipers by Italian specialist Brembo, which are painted red and clearly visible through those thin-spoke alloy wheels.

This theme continues inside, with the black leather and Alcantara suede fabric seats being brightened up with contrasting stitching, which also features around the gearlever and steering wheel. Club Series cars feature the same aluminium pedals, sat nav, DAB radio, infotainment touchscreen and Bluetooth connectivity as is to be found in the rest of the GT86 range. 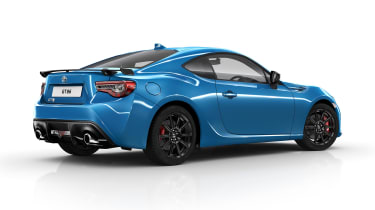 As with other GT86 models, a 197bhp 2.0-litre engine is fitted, as is a limited-slip differential. This means power will continue to reach both rear wheels, even when one starts to slip – great news for drift fans.

The GT86 Blue Edition will be available from 1 June, costing £28,980 when ordered with the six-speed manual gearbox and £30,455 when specified with a six-speed automatic. Those prices represent an increase of £945 over the GT86 Pro, which is similarly equipped, although not as strikingly styled.