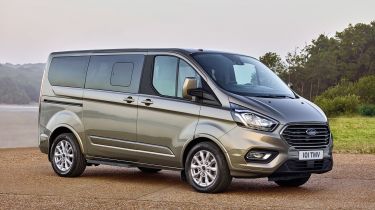 The Ford Tourneo Custom MPV has been revealed to satisfy executive shuttle companies, as well as large families and other customers in need of lots of space.

Inside, you’ll find eight seats that can be arranged in a ‘conference format’ unique in the class, where the six rear seats face each other, rather like in a railway carriage. Short and long-wheelbase versions will be available, with the latter providing more luggage space behind the third row of seats. If you need the maximum number of passengers, a nine-seat option is offered, too.

Ford is keen to point out the Tourneo has been “comprehensively re-engineered” to improve refinement, reducing noise and introducing new trim materials to improve comfort. Traditionally, van-based MPVs have been noisier and cheaper inside than dedicated MPVs. 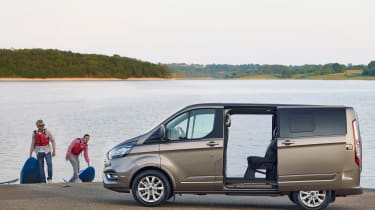 You can distinguish a Tourneo Custom from the regular model by its new nose, with a five-bar chrome grille, LED daytime running lights and by its heavily tinted side windows. Top trims will also get xenon headlights to light the way at night, and add a modern look.

Inside, the instrument panel is all-new, so instead of lots of buttons there’s a tablet-style eight-inch infotainment screen sat between the air vents, following the design language introduced in the all-new Ford Fiesta supermini. It uses Ford’s SYNC 3 software, so smartphone connectivity (including Apple CarPlay and Android Auto) should be fully catered for, and you can even pinch and swipe the screen. 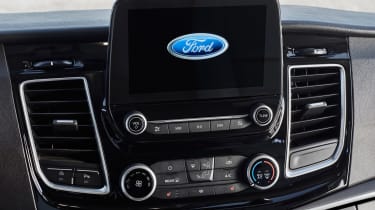 The dashboard has been improved with soft-touch materials, chrome trim and gloss black inserts, while practicality should also be better thanks to two lidded compartments above the instrument panel and a central storage bin with two cup-holders and a “smart roller cover”. There are six USB ports to charge and connect devices and technology also extends to a 10-speaker stereo. 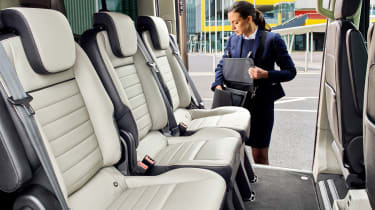 Just one 2.0-litre EcoBlue diesel engine is available, but with power outputs of 104, 128 or 168bhp, there should be a version to suit everyone. Fuel efficiency is said to be up by as much as 13%, despite low-down pulling power being improved by 20% and CO2 emissions can be as low as 162g/km.

The Tourneo Custom can come with Ford’s six-speed SelectShift automatic gearbox and air suspension for the rear axle that is said to offer a “supple, controlled and level ride”, adapting to the weight of the load being carried. There’s also the option of 17-inch alloy wheels and tyres that are said to improve the handling and braking performance.

Production is set to begin in late 2017, with the first Tourneo Custom deliveries expected in early 2018. While prices haven’t been announced yet, the current entry-level Zetec model is on sale from £34,000 (including VAT), while the Titanium costs from just under £36,000.