2018 Phantom heralds new engine and mechanical platform, which will be shared with forthcoming Rolls-Royce Cullinan SUV 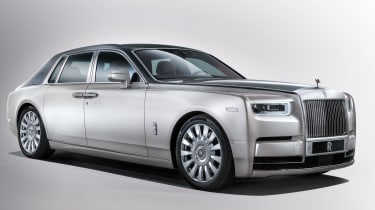 The 2018 Rolls-Royce Phantom has been revealed in London. The new saloon, dubbed “a dominant symbol of wealth” by its maker, features an all-new aluminium platform, which will underpin the new Rolls Royce Cullinan SUV, as well as the next-generation Ghost, Wraith and Dawn.

Rolls-Royce says the new Phantom is built around a mechanical backbone that can accommodate “different propulsion [and] traction” systems, alluding to an electric or hybrid Rolls-Royce as well as the four-wheel drive Cullinan SUV.

Also new for the 2018 Phantom is a 563bhp 6.75-litre V12 engine, which now features twin turbochargers. The new Phantom is lighter and 30% stiffer than the car it replaces, as well as being 60 decibels quieter at 62mph.

As before, the sat nav system is linked to the Phantom’s eight-speed automatic gearbox, allowing the Phantom to be in the optimal gear for the road ahead.

The new Phantom is the eighth generation of a model that has been built since 1925. It’s the second-generation of the modern-day Phantom, which was resurrected in 2003 after an absence of over a decade.

While it sits on an all-new aluminium backbone, aesthetically the new Phantom is an improvement on its predecessor rather than a complete rethink.

The result is a sleeker, more streamlined car. Both the front and rear windscreens are now less vertical and more steeply raked, while the car’s waistline and ‘pantheon’ grille are higher. Rolls will also sell you a long-wheelbase version, which is 22cm longer than the standard Phantom. 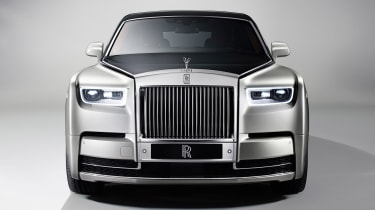 That grille – perhaps the most striking aspect of the Phantom – is now more fully integrated into the bodywork of the car, while the Spirit of Ecstasy mascot that rises from its depths stands half an inch higher than previously.

Most Phantom owners will spend the majority of their time in the car in its rear, and no stone has been left unturned by Rolls in the pursuit of luxury. The seats, for example, are angled slightly towards each other, so passengers don’t have to crane their necks to have a conversation. 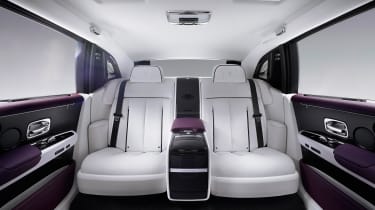 While almost every surface can be veneered, upholstered, stitched or forged to owners’ precise specifications, Phantom customers will be able to choose from four main seating options when commissioning their cars. 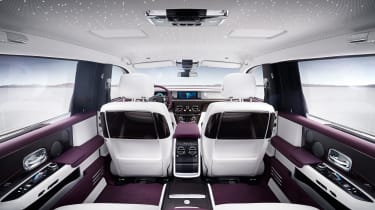 There’s a new central console in the back as well, which hosts a small drinks cabinet complete with whiskey and champagne glasses, as well as a decanter and a coolbox. TV screens and picnic tables emerge from the back of the front seats at the touch of a button, disappearing when not in use. The previous Phantom’s Starlight ceiling (which comprises countless LEDs to give the impression of the night sky) returns, although it’s now larger than ever before.

Getting into the Phantom is billed as being different from a ‘standard’ car; owners step into what Rolls-Royce calls an ‘embrace’, meaning the motorised doors softly open and close at the touch of a sensor on the door handles.

The ‘Flagbearer’ system is also new. Named after the early motoring law that required cars to be preceded by a man waving a flag, this uses two cameras to scan the road ahead. The information gathered by these is then fed to the Phantom’s air suspension system, which will adjust to minimise the intrusion caused by imperfections in the road. 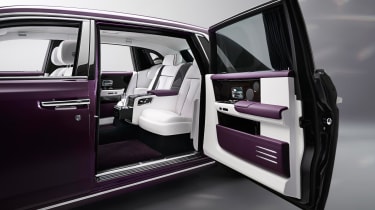 Owners will also be able to commission artists to work on the Phantom’s dashboard, or ‘gallery’ - so called because it rests behind a single piece of glass. Customers can allow their imaginations free rein for the gallery, but suggested ideas include an oil painting of the South Downs, an abstract silk design and a “a gold-plated 3D-printed map of an owner’s DNA.” 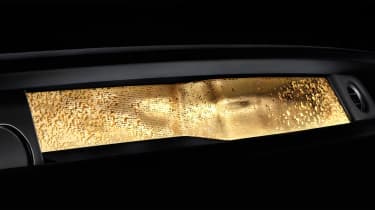 The car’s tyres contain a foam layer to eradicate road noise, while the double-glazed windows are 6mm thick and the sound-deadening insulation material fitted accounts for 130kg of the Phantom’s weight.

Almost every surface inside the car is heated, from the seats right through to the front door armrests, the rear side arm rests and the bottom of the pillar between the Phantom’s roof and its body.

Driver and passenger safety has also been given due consideration - the Phantom’s LED headlights, for example, can shine 600 metres down the road.

Other protective technologies include a quad camera bird’s-eye parking system, night vision, active cruise control, lane departure warning, and what Rolls-Royce says is a new and “industry-leading” head up display. The Phantom’s driver will sit in front of a new 12.3-inch digital dashboard, though the Phantom retains its analogue clock.

The new Phantom is expected to be priced somewhere in the region of £340,000 when it goes on sale in late 2017. Rolls-Royce’s willingness to build the car to your exact specifications means there will be many examples produced that cost significantly more than this starting price.