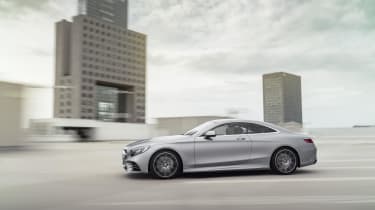 Mercedes has refreshed its flagship S-Class Coupe and Cabriolet ranges, with prices starting at £104,115.

The luxurious two-door models have been given a makeover that brings their looks into line with the latest S-Class saloon, as well as the stylish Mercedes E-Class Coupe and Cabriolet that were launched earlier this year. New engines have been introduced, while technology levels have been dialled up a notch.

The S-Class Coupe and Cabriolet are available in regular Mercedes and high-performance Mercedes-AMG form, with models ranging from the S560 to a V12-powered S65. The latter's price tag puts it head-to-head with the W12-powered Bentley Continental, while V8 versions of the Bentley are undercut by the slightly less powerful Mercedes-AMG S63.

Changes include the addition of an 'entry-level' S560 model that uses a new 463bhp 4.0-litre V8 engine. It’s more fuel efficient than the 4.7-litre S500 it replaces thanks to technology that allows parts of the engine to shut down when full power isn't required. 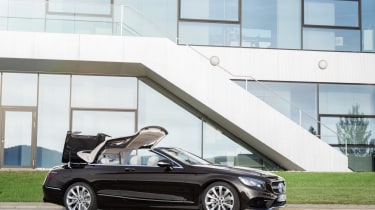 The decrease in engine size doesn't come at the expense of performance. The 0-62mph sprint is completed in 4.6 seconds, while fuel consumption of 35mpg is promised alongside CO2 emissions of 188g/km. The S560 Cabriolet is no slower, but a little less economical at 32.4mpg, a figure that seems unimpressive until the Mercedes' weight and power are taken into account.

These last items comprise “wafer-thin layers of organic materials printed on a glass plate” and allow the S-Class Coupe and Cabriolet’s lights to exhibit more detailed animations when the cars are locked and unlocked. They also adjust their intensity depending on visibility conditions and whether it’s day or night. 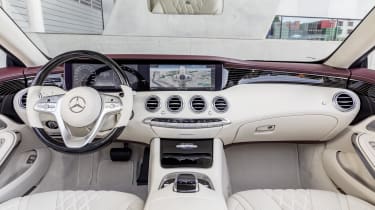 Standard equipment is lavish. Inside, both cars benefit from updated twin 12.3-inch HD screens, joined behind a single pane of glass, as part of a COMAND infotainment system that incorporates Android Auto and Apple CarPlay. Sound comes via a Burmester surround sound system, ambience is provided by a 64-colour ambient lighting system and fixed panoramic sunroof, while seats and steering wheel are electrically adjusted with a memory feature.

The new steering wheel features touch-sensitive buttons, which respond to swipe gestures as a smartphone would. Also new for the 2018 model year is Mercedes’ concierge service. This, when contacted, will make restaurant reservations, relay information about sporting events and send route mapping to the car’s sat-nav system. Wireless mobile phone charging is also standard.

Although optional on all but the S65, where it’s standard, the ‘Energizing’ package may hold appeal for some. This unites the climate control, heated armrests, air fragrance diffusers, ambient lighting, music system and the massaging, heated, cooled seats under a universal set of controls. Owners can choose from modes called Freshness, Warmth, Vitality, Joy, Comfort, Training (Muscle Activation) and Training (Muscle Relaxation) modes, and the systems listed above will respond in unison, delivering a 10-minute programme, for what is intended as a pampering, spa-inspired experience.

The Mercedes-AMG S63 and S65 are extremely powerful and expensive performance variants of the S-Class Coupe and Cabriolet. The S63 features a 604bhp twin-turbo 4.0-litre V8, with power increased from 577bhp in the pre-facelift car. The S63 gets a 6.0-litre V12, which produces the same 621bhp as it did previously. 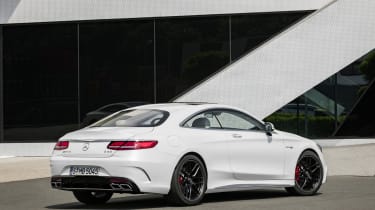 New for the 2018 model is Mercedes-AMG’s Panamericana radiator grille. First seen on the Mercedes-AMG GT S of 2014, this vertically slatted grille is fast becoming a hallmark of quick Mercedes-AMG models. Also new for 2018 is the nine-speed ‘AMG Speedshift’ automatic gearbox, which is fitted to the S63 models. The S65s get a conventional seven-speed automatic. 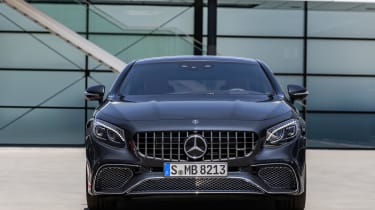 While the pre-facelift S-Class Coupe and Cabriolet were available with Mercedes’ DISTRONIC adaptive cruise control system and steering assistance systems, the autonomous functionality has been improved for the 2018 model year. By making use of information from the sat nav, the adaptive cruise control adjusts itself automatically when approaching corners and junctions.

Similarly, the optional ‘Magic Body Control’ setup – which keeps the cars level when cornering by adjusting the (standard) air suspension – has been improved and now works at up to 112mph.