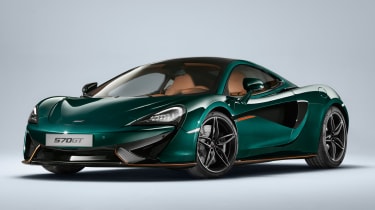 McLaren has produced a limited number of McLaren 570 GT models in a historic colour scheme, through its Special Operations division.

The six 570 GT models finished in ‘XP Green’ constitute a new MSO Collection inspired by the McLaren F1 XP GT Longtail, which was built in 1997 as the original road-going prototype of the Longtail GT race car.

The XP Green MSO Collection 570 GT has been designed and produced by McLaren Special Operations, a division of the company that offers customers virtually infinite ways to personalise their cars.

The paint colour used on the six cars is essentially British Racing Green, and in combination with the saddle tan accents on the front aero blades, side skirts and rear diffuser, it makes for a very traditional motor-racing colour scheme. The car’s doors sport a saddle tan stripe and a small silver Union Jack emblem to emphasise the theme.

The colour scheme continues inside the car, with a Saddle Tan leather interior incorporating green leather inserts and contrasting green stitching. A dedicated plaque sits on the centre tunnel underneath the infotainment screen to show which number the car is out of the six produced.

The alterations made to the standard McLaren 570 GT by MSO for this model add £21,000 to the car’s price. Add a few options such as a By McLaren Designer Interior, the GT Upgrade Pack and lightweight forged alloy wheels in ‘Stealth’ finish, and the final cost of the car comes to £188,567. All six cars already have buyers, with their prospective owners living in the UK, Germany and the Netherlands.

The McLaren 570 GT is the most relaxed and practical of McLaren’s Sport Series models, with softer suspension and added storage space compared to the 570S. It’s still a great car to drive, however, with its twin-turbo 3.8-litre V8 producing 562bhp.